Why APC will win the 2023 presidential election — Uzodinma

(VIDEO) Nigeria Is A Failed Nation That Is Not Working…

BREAKING: Fulani Vigilante In the South East Is Not An Issue For Discussion – S-East Governors 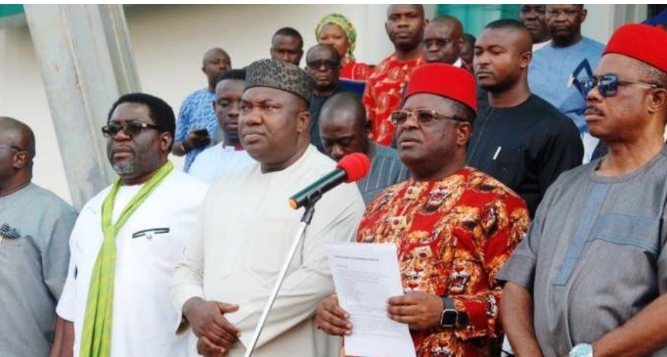 SAHARANEWS – Governors of the south-east say the proposal by the Miyetti Allah Cattle Breeders Association of Nigeria (MACBAN) to organise local vigilance groups in the south-east will not work.

According to MACBAN, the proposal is to assist leaders in the zone curtail criminal activities in the region.

But the governors said they will not allow such idea to come to fruition.

In a statement, Dave Umahi, chairman of south-east governors forum, described the allegation of the governors allowing MACBAN to form vigilance group as strange.

“I find it extremely strange for anybody to think that none locals in any part of the country including south-east can be allowed to form vigilance outfit,” he said.

“The Miyetti Allah group may have made that suggestion which I believe will never mean to form a vigilante in south-east whichever is the meaning, no governor will allow that.

“South-east governors have their local vigilance groups working with security agencies; any such demand by Miyetti group is a joke and not acceptable. Governors of the zone are doing their best and we have no problems receiving insults from our people, it is the price of leadership.

“The important thing to us is the safety and well-being of our people; the Oodua Peoples Congress (OPC) and other pressure groups may not have found it fashionable to insult their leaders even when their leaders may not be saints.”

Umahi said his task is to develop Ebonyi and contribute to the rebuilding of the south-east and the country at large.

“My calling is not to insult others. Have we been fairly treated? No. Can we solve the problem by hate speeches? For me, the answer is no,” he said.

“Nobody, no matter the level of pretence can change my style of peaceful leadership. Ebonyi, in particular, has suffered so much even in the context of south-east.

“We believe that we do not need hate speeches as a strategy to solve our problems.

“Finally, we insist there will be no Miyetti vigilante, no cattle ranch or colony; but we must live peacefully with herdsmen that do not destroy our farm lands especially those that were born here and have lived peacefully with us.

“All South-East governors are together in this position.”