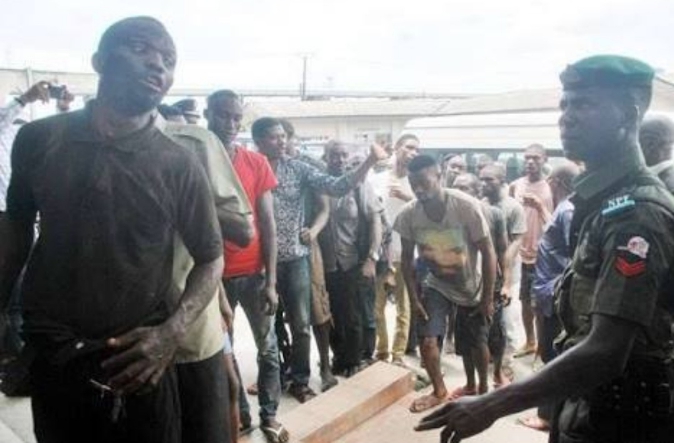 SAHARANEWS – The Ebonyi State Police Command, on Wednesday, confirmed the arrest of 15 suspected members of the proscribed Indigenous People of Biafra and Movement for the Actualisation of the Sovereign States of Biafra in the state.

They were arrested in a bush at Amasiri Community in the Afikpo North Local Government Area of the State, on Tuesday, August 13, 2019, by a combined team of the men of the Nigerian Police and other security agencies.

The suspects were allegedly planning how to hold their 2019 summit in the state.

The groups’ annual meeting, our correspondent gathered, was billed to take place between Tuesday, August 13 and Wednesday, August 14, 2019 in the state.

The arrest of members of the separatists’ groups, came, 24 hours after the Ebonyi State Government, led by Governor David Umahi, maintained that the IPOB remained a proscribed organisation and warned members of the public against its activities in the state.

In a statement signed by the Command’s spokesperson, Loveth Odah, “The Ebonyi State Police Command, in active collaboration with other security agencies in the state, while acting on credible intelligence report that IPOB/MASSOB members will have their 2019 convention in the state, on 13 and 14 August, 2019, embarked on massive “show of force” covering the entire length and breadth of the state with particular focus on identified flashpoints.

ALSO READ:  Kevin Strickland, who was jailed for more than 40 years for three murders, was released from prison Tuesday after a judge ruled that he was wrongfully convicted.

“The exercise dominated the entire state and frustrated the activities of IPOB/MASSOB members, thereby denying them the opportunity to hold their meeting in the prearranged venue.

“They were however traced to a hideout in the bush around Amasiri community, in Afikpo North LGA of the state where fifteen (15) members led by one Rev. Ogonna Nnachi ‘M’, about 70 years of age were arrested. Items recovered from them include Biafra Currency (2 pounds), branded Biafra T-Shirts, caps and bangles.

“Upon interrogation, their leader Rev. Ogbonna narrated that they were planning the burial of one of their members who died in Lagos, but was to be buried in Ohaozara LGA of the state and also planning the building of a monument in honour of late Odumegwu Ojukwu at Owerri Imo State. The arrested members were handed over to SCID for further interrogation and profiling.”

Odah added, “Ebonyi State Police Command will continue to explore all crime-fighting tactics by combing all hideouts of criminals/criminal-minded persons with the view to deny them the space to carry out their acts