BREAKING: Heavy Tension In Aso-Rock As FG Reacts To The UN’s Report On Arbitrary Killings of IPOB Members, Says Nnamdi Kanu Is A Threat To Nigeria’s Peace And Unity 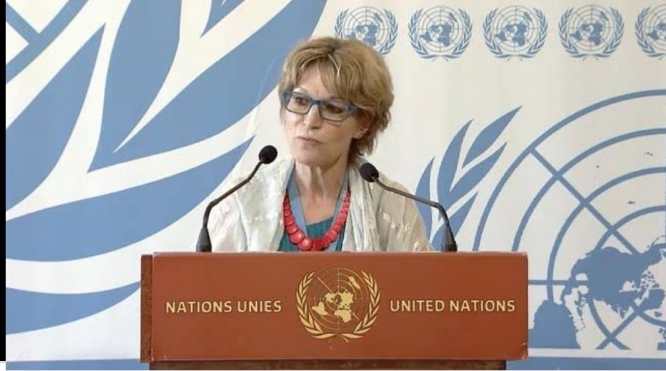 SAHARANEWS – The United Nations security committee has released long expected report on the arbitrary killing of members of the Indigenous People of Biafra.

Also said federal government flattered orders by the African Commission not to proscribe the group regard existing investigation, noting thar interim decision by ACHR was not implemented.

See part of the report:

“Since 2015, members of IPOB have faced arbitrary arrests, torture and extrajudicial executions, predominantly in the context of demonstrations.

Between 2015 and 2016, it is alleged that law enforcement officials killed at least 100 IPOB members in different events in Aba (Abia State), and Awka and Onitsha (Anambra State).

On 29 and 30 May 2016, during a demonstration, the Nigerian military opened fire on IPOB members and bystanders in Onitsha. At least 60 persons were killed and over 70 injured, mainly shot in the back.

The exact number of deaths remains unknown.
Between 12 and 14 September 2017, IPOB followers gathered at the family home of their leader, Nnamdi Kanu, in Afara-Ukwu (Abia State) to take part in a peaceful vigil.

The military operation (as part of Python Dance II) carried out in the afternoon of 14 September 2017 is alleged to have resulted in the killing of 150 persons. The IPOB leader went in exile and some of its followers remain disappeared since then. No Nigerian soldiers were killed in the operation.

Following this event, the Federal High Court in Abuja proscribed IPOB and designated it as a terrorist group.

During my visit, I met with several survivors of various security attacks and witness to killings. I have received a large number of allegations of killings by the Military Forces in 2017, 2018 and 2019. In addition, a number of those arrested are allegedly held incommunicado before being detained without charges. When charges are finally made, they include membership to a terrorist organisation, unlawful gathering and in some cases kidnapping.

It is alleged that not a single conviction against IPOB members has been secured since 2015, due to discontinuance or dismissal of charges. None of the killings of IPOB members have been investigated.

On March 8, 2018, the African Commission issued Provisional Measures, asking the Federal Government of Nigeria to rescind its decision branding IPOB and its members as terrorists as well as the proscription and “Not to take any further action so as to avoid irreparable damage to the Victim, IPOB and its members, pending the decision of the Commission on this Communication.”