BREAKING: I Overrated APC, I Wish I Had Listened To Nnamdi Kanu, Imagine Oshiomhole Asking Security To Send me Out Of His Office, But I Know What To Do – Gov Rochas (VIDEO) 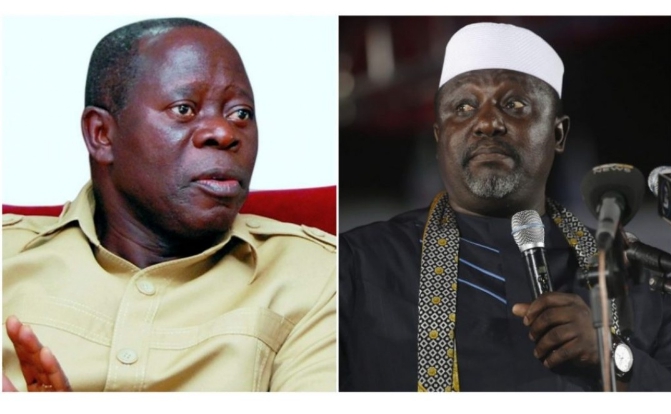 SAHARANEWS – The Outgoing Governor of Imo State, Rochas Okorocha, has claimed that the National Chairman of the ruling All Progressives Congress, APC, Comrade Adams Oshiomhole, once sent his DSS detail to insult him.

Okorocha said he had gone to interact with his party Chairman about issues relating to happenings in the party when he (Oshiomhole) sent his DSS personnel to push him out of his office.

Speaking in an interview with Vanguard, Okorocha said the incident happened in the presence of the APC governorship candidate in Akwa Ibom State, Ekere Nsima.

ALSO READ:  'Deliver Us From Union Of Death In Nigeria'—Yoruba Nation Agitators, Others Protest At UN Headquarters To Demand Referendum

The Governor, however, said he was not considering leaving the ruling party, at least for now.

Asked if he still feel comfortable in the APC, Okorocha, whose son-in-law, Uche Nwosu joined the Action Alliance, AA, prior to the general elections, said: “I am APC. I have never thought of leaving the party for now and I have no reason because I won under the platform of APC.

ALSO READ:  JUST IN: Don't Let Your Disappointment With Buhari Turn You Into A Bigot - Lamido Cautions Obasanjo

Asked if he was stranded, he added: “I am not stranded, I remain in APC and I have not indicated that I’m going to leave APC. Remember that the intention of these people is to frustrate me out of politics and out of APC so that they can have a field of play. But all I advise today is that let no institution or organization allow themselves to be used as an instrument to destroy somebody politically, who has committed no offence.”

On what he will do if by chance he meets Oshiomhole today, Gov. Okorocha said: “We will chat as usual. What will I do to him? The last time I saw Oshiomhole was when I went to his office and he sent his SSS man to insult me in his office, before the governorship candidate of Akwa Ibom, the NDDC guy, Obong Nsima Ekere, who also reacted against the gentleman.

“An SSS was pushing me out as a governor from his office. So, I’ve taken enough insults from Oshiomhole and all those that are planning this evil.

BIAFRA: Ohanaeze Ndigbo, S-East Leaders Are Taking Their Own People For Granted In A Bid To Please Their Fulani Masters – IPOB