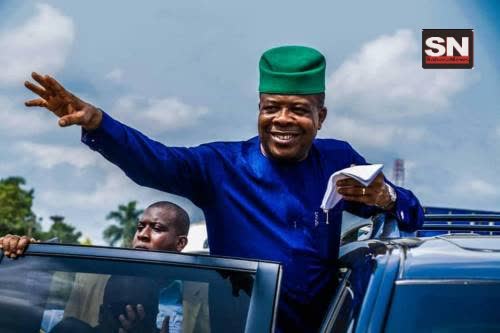 SAHARANEWS – The ongoing tussle between Emeka Ihedioha, the new governor of Imo State, and his predecessor Rochas Okorocha, might not end soon as Ihedioha has vowed to probe every financial dealing done by the state in the last eight years.

Ihedioha said this as he revealed that nothing was handed over to him by Okorocha.

He stated this while speaking with the incoming lawmakers in the state today.

The governor vowed that all those who embezzled the state’s funds must be dealt with, adding that the service of security agencies would be employed to investigate all spending.

ALSO READ:  JUST IN: Mark my words, Nnamdi Kanu Will Be Greater Than Mandela, Biafra Is Near - Australian MP

“I will have to involve the services of security agencies in making sure that those who served the state must account for it (money spent).

“I will criminalise those who loot our treasury. Nothing was handed over to me. We must make them accountable,” Ihedioha said.

He advised the lawmakers-elect to diligently serve the state, noting that the state is at a “critical point”.

He said, “The opportunities that your legislative position offers may also appear daunting as it is exciting, and as challenging as it is empowering.

“I say this, because you will be assuming your position as members of this legislative assembly at a very critical time when the state is at the crossroads of seeking recovery from an era of arbitrariness to the new direction that we are set to go, of order, due process and respect for the rule of law.”

Meanwhile, Okorocha, while giving his valedictory speech warned the incoming administration of Ihedioha not to fight him.

“When you remove this seal of governance off my face, you will see the real Rochas. The real Rochas is still asleep, if not bigger than the governor, so let no one fight me and I will not fight anybody,” Okorocha said.

BREAKING: The Entire South East Will Be Taken Over By Herdsmen Since They Have Decided To Be Stubborn”- Miyetti Allah Vows