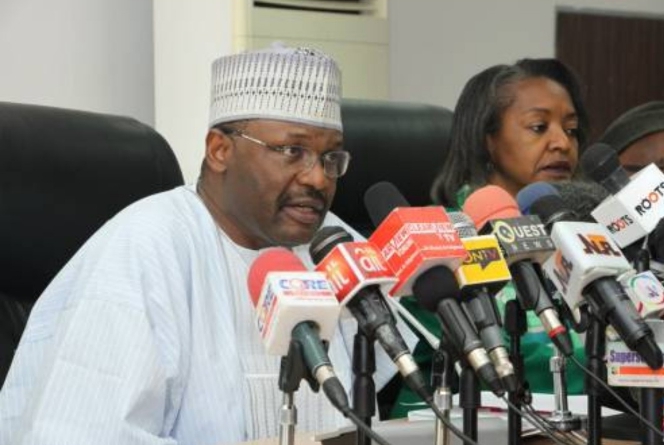 SAHARANEWS – The Independent National Electoral Commission (INEC), on Friday expressed reservations over the judgement of the Federal High Court in Abuja, which directed it to issue a Certificate of Return to Rochas Okorocha as Senator-elect for Imo west senatorial district.

In a statement signed by Festus Okoye, INEC director of voters education and publicity, the electoral body said it was worried that “if electoral impunity is allowed to flourish, any individual can harass, intimidate and put the Commission’s officers under duress, procure a favourable declaration and be rewarded with a Certificate of Return.”

The commission, however, said it would meet to “do the needful” over the court judgement as well as another one from a high court in Imo state directing it “not to issue a certificate of return to any of the candidates that contested the Imo west senatorial district election.”

INEC had refused to issue the certificate to Okorocha who was declared winner of the poll, after the returning officer reported that he declared the former Imo Governor winner under duress.

It said while the order from the High Court of Imo was issued on May 23, “the judgement delivered by the Federal High Court, Abuja is the latest in time and determined the rights of the parties in relation to the subject matter of the Certificate of Return, in respect of the Imo West Senatorial Election.

“As a law-abiding institution, the Commission will continue to obey judgements of all courts of competent jurisdiction.”

BREAKING: Win Win, Jubilation For Okorocha And His Son-In-Law As Court Passes Judgments In Their Favour

BREAKING: Facebook Cuts Off Huawei In Compliance To US Sanctions

A Man With an Empty Vessel,does not understand the concept of Biafra —Asari-Dokubo…

A Man With an Empty Vessel,does not understand the concept of Biafra —Asari-Dokubo Blast Nnamdi Kanu