BREAKING: “IPOB Has Staged A Media War Against Me And The Govt Of Ebonyi State” – Gov Umahi Carries Out 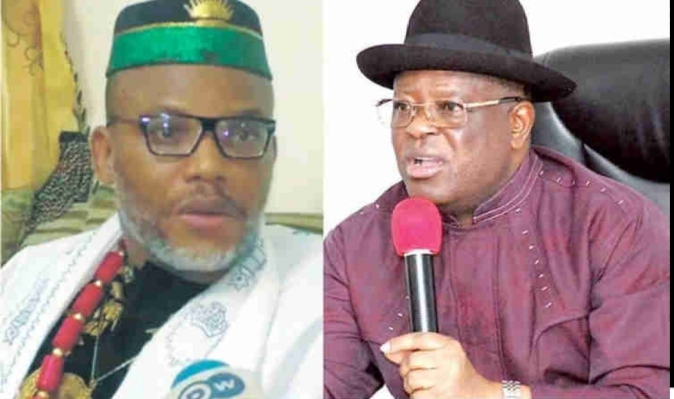 SAHARANEWS – The Governor of Ebonyi State, Chief Dave Umahi at the weekend raised the alarm over the rising activities of miscreants suspected to be members of the outlawed Indigenous People of Biafra (IPOB) who according to him have resorted to circulating all kinds of cheap lies and blackmails against him and his government.

Umahi made this known through a press statement signed and issued to newsmen in Abakaliki by his Special Assistant (SA) on Social Media, Emmanuel Igwe.

He said the miscreants have taken over social media where they dish out all kinds of unfounded lies in form of write-ups, audio and video recordings against him and his government.

The Governor said that in as much as he cannot dignify the miscreants by joining issues with them, it has become pertinent to let the public know their new antics so they can be wary of them.

He described the action of the group as the last kick of a dying horse, having now realized that their fraudulent activities in the name of IPOB have been exposed.

“I warned the group to desist from character assassination and blackmails against me and my Government or they will regret their actions,” he said.

The Governor further warned the unscrupulous elements indulging in the act to bear in mind that the cybercrime prohibition Act of 2015 is still in force, and that anybody caught must face the full weight of the law.

He urged the general public to keep away from the miscreants and their activities as security agencies have been detailed to clamp down on them.

Umahi, however, assured the people that his administration would continue to protect them from killer herdsmen and tackle other insecurity problems.

ALSO READ:  BREAKING: (VIDEO) Give Us Land If You Want Peace In Your State - Miyetti Allah To Governors