IRAN VS US: (VIDEO) Footage Of The Air Strike That Killed… 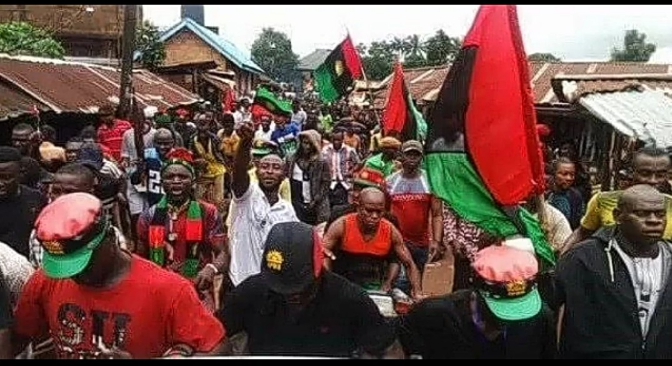 SAHARANEWS – Following the proposed RUGA Settlements by the Federal Government, the members of the Indigenous People of Biafra (IPOB) have led a peaceful protest in Abakaliki, the capital of Ebonyi State.

IPOB members who came out in their numbers grounded human and vehicular movements along some major roads and streets in the state capital for several hours as they announced their total rejection of Ruga program.

The peaceful protest was organised by the religious arm of IPOB known as Supreme Clergy Council of Biafra (SCCOB).

The IPOB members who wore Biafra insignias and brandished Biafra flags commenced their protest from Mechanic village. From there, they marched through Ogoja Road and branched to Gunning Road and marched through Abacha Roundabout to New Market Road before joining Afikpo Road through Vanco Junction.

Upon getting to Spera-in-Deo, they returned to Mechanic village from where they took off.

Speaking to journalists, leader of the protesters, Bishop Nwachinemere Stanley, said that they decided to embark on a peaceful protest to register their displeasure and total rejection of Ruga and other ‘bad’ policies of the Federal government.

Nwachinemere said: “We are members of Indigenous People of Biafra (IPOB) in the clergy department called Supreme Clergy Council of Biafra (SCCOB). We are the religious arm of Biafra restoration.

“Today, we the clergy and other departments in IPOB came out to express our dissatisfaction over the happenings in Nigeria including their evil plan to establish Ruga in Igboland. We are not in support of this their evil agenda. We are totally against Islamisation of Igboland. We are Biafrans, we are not Fulani.

“Security agencies tried to stop us but we resisted them and protested successfully against Ruga because we are preachers. We should stand out to speak the truth. We are called for freedom and we are not after anybody’s sorrow or tears. We are deliverers,” he said.

The IPOB cleric alleged that the security agents fired gunshot at them, an allegation which the police through its spokesperson in the state, DSP Loveth Odah denied.

“Security agents shot at us and I sustained a facial injury which I thank God it not serious,” Nwachinemere alleged.

Continuing, Nwachinemere said: “This Ruga is a Fulani term. It is a secret plan to occupy indigenous land of our people and that is why we say no. If you want to come to a particular city to do business, you have to liaise with the people and not to secretly rob them indirectly. No matter what they call this their evil plan, we reject every Islamic agenda.

“The scripture said that God is looking for a man to stand in the gap that the land might be free and that is what we have chosen to do. So, we are saying enough of Fulani Islamic agenda; enough of raping of our women. Enough of killing innocent people without a reason, kidnapping and others,” he added.

“There Is Anger In The Land And The Voices Of Reason Are Drowning Very Rapidly,” – Abdulsalami Abubakar Laments