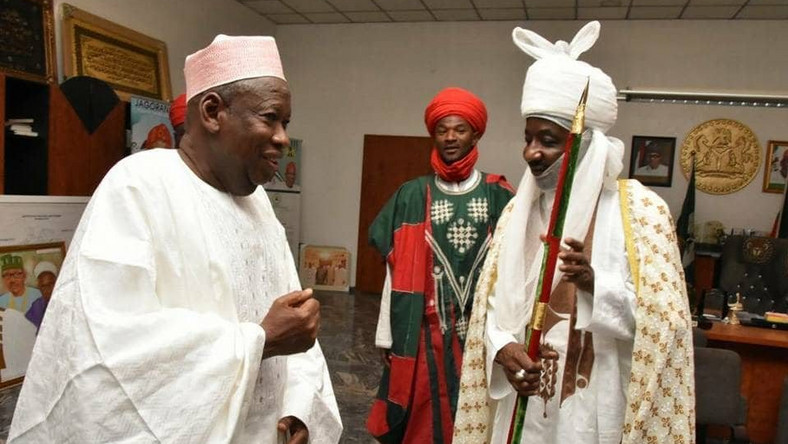 SAHARANEWS – The seems to be more trouble for the Emir of Kano Muhammadu Sanusi II, as an ongoing probe by the state government’s anti-corruption agency could lead to charges being filed against the him.

SaharaNews Recalls that on Wednesday, the Kano State Governor, Abdullahi Umar Ganduje create additional emirates in the state on Wednesday and that seems not to be the last turbulence coming his way.

The exercise which lasted only two days, fuelled speculations that the government was going after the emir over his rumoured support for the opposition during the recently concluded governorship election.

The fresh investigation by the Kano State Public Complaints and Anti-Corruption Commission as well as the bid to appoint new first class emirs by the state assembly kick-started almost simultaneously last week.

The investigation is re-launched exactly two years after the agency first announced that it was probing “outrageous and questionable” spending that had emptied the Kano Emirate Council’s account.The former Personal Private Secretary to the emir, Alhaji Isa Sanusi Bayero, also known as Isa Pilot appeared before a team of investigators on May 9, following an invitation by the commission. Another aide of the emir is also expected to be questioned soon.

A source in the commission, who craved for anonymity, yesterday informed our correspondent that the ongoing probe on by the commission was targeting the emir, noting that “It will reach to a point where the commission will transfer the case to court for the emir to defend himself. After our findings, whoever is found wanting in misappropriating the public funds will be dragged before the court.”

A government source Saturday disclosed that Emir Sanusi, after sensing trouble at the turn of events between the state government and the palace lately, sent business tycoon, Alhaji Aliko Dangote, to beg the governor to have a change of mind.

“I can confidently tell you that when the probe was renewed and the move for creation of four new emirates in the state started, the emir sent the renowned business mogul, Alhaji Aliko Dangote, to Ganduje to plead with him to stop the two moves.

However, Ganduje in his response told Dangote to go back and tell the emir that he should choose from three alternatives: To resign on his own or be removed from office or the government will create additional emirates in the state. Ganduje assured Dangote that one of the three options must be implemented by government since the emir will not stop playing partisan politics against him,” the source revealed.

If not for the quick intervention by Dangote, Gaanduje would have dethroned the emir.

However, the source added that even though the governor has spared the emir being removed from office, there is likelihood that after the turbaning ceremony of the four new emirs, Ganduje will transfer the emir to another emirate and replace him with one of the newly appointed emirs.

Speaking about his interface with investigators, Isah Pilot said he was given vouchers and asked to identify them. “I identified some and asked the investigators to give me some time to verify the others. I am going back to the commission tomorrow (Monday) for further questioning. I am ready to give the commission any information it will demand from me,” he said.

In 2017, the Kano anti-corruption agency said its probe stemmed from a petition on transactions which it claimed had emptied the Emirate Council’s account of the sum of N4 billion left behind by the former emir, the late Alhaji Ado Bayero, who died in 2014.

Shedding more light on the matter at the time, a source disclosed that between N150 million or 200 million was transferred from the account in a single day.

That investigation was halted after the state assembly took over the case from the anti-corruption agency and subsequently suspended it after interventions by prominent Nigerians, including former heads of state, General Ibrahim Badamasi Babangida (rtd), General Abdulsalami Abubakar (rtd) two renowned businessmen, Dangote and the late Isyaka Rabi’u.

Newsmen could not get the comment of the chairman of Kano State anti-corruption agency, Barrister Muhyi Magaji Rimin Gado, as he was said to be out of the country.

Contacted, the Chief Press Secretary to Governor Abdullahi Umar Ganduje, Alhaji Abba Anwar, denied the allegation that the Kano State government was witch-hunting the emir because of his alleged involvement in the last gubernatorial poll.

“The new emirates were created in order to bring development closer to the masses. It is a well known fact that the roles our traditional rulers are playing in the area of promoting health care delivery, education, agriculture and environmental protection cannot be over emphasized.

“It is based on this that the government decided to create more emirates so that these kinds of development can be spread across the nooks and crannies of the state. As far as Kano State government is concerned, Emir Sanusi did not do anything harmful to it or the governor.”

On the issue of the ongoing investigation by the state anti-graft agency, Anwar said government was not in a position to comment on it, as according to him, the commission was an independent body and government had never interfered in its activities.

Efforts to speak with Chief of Staff to emir Sanusi, Alhaji Munir Sanusi, proved abortive, as his lines could not be reached despite several attempts.