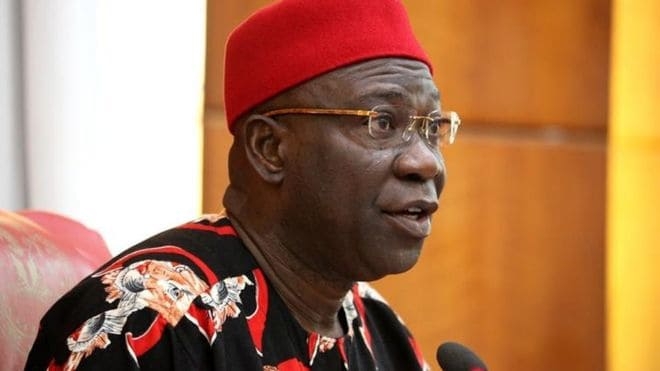 SAHARANEWS – Moments after arriving Nigeria, former deputy president of the Senate, Ike Ekweremadu, urged governors and leaders from the south east to leave Nnamdi Kanu, leader of the Indigenous People of Biafra (IPOB), to his conscience.

Ekweremadu noted that the same set of leaders that Kanu and his proscribed group are targeting helped him when he was in detention.

Speaking through his media aide, Uche Anichukwu, Ekweremadu said: “Let me just say that the leaders he (Kanu) was mentioning were responsible for getting him out of jail in the first place.

“What we will do in this circumstance is to leave him to his conscience, the verdict of history, and possibly the repercussions of ingratitude.

“But I hope he won’t go to the extent of attacking any of the south east leaders anywhere.”

The former deputy Senate president said he no regrets speaking for justice for the Igbo people as well as helping to facilitate the release of Kanu from detention.

Noting that he is still a senator in Nigeria, he added that his job remains to speak out when there is injustice anywhere.

“I donated money. I sent relief materials. We had problem in the south south, I visited the creeks and saw the environmental challenges there for myself.”

He recalled being one of the few people the late President Musa Yar’Adua consulted before he decided on the issue of amnesty for the militants in the Niger Delta.

ALSO READ:  BREAKING: Jubilations For Okorocha As He Finally Smile Home With His Certificate Of Return

“I was the person who advised him that he needed to call a meeting of the council of state.

“So, he had to invite the then attorney general to discuss that issue with me and I advised them on the constitutional implications of amnesty,” he added.

BREAKING: “If Any Biafran Die As A Result Of Operation Python Dance lll, We Will Come After Your Children” – Nnamdi Kanu To South-East Governors