JUST IN: Ohanaeze Ndigbo working with IPOB to Sabotage… 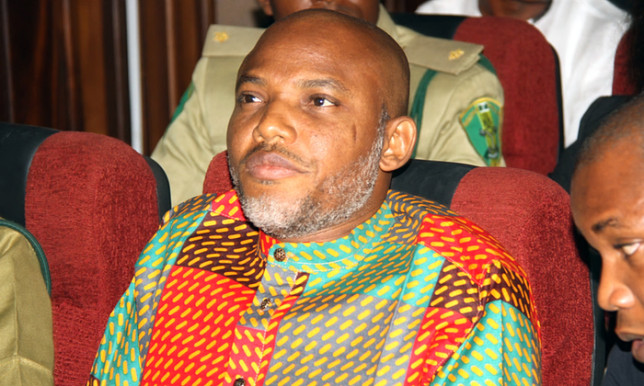 Nnamdi Kanu, the leader of the Indigenous People of Biafra who is currently in custody, has filed a lawsuit against the Director General of the National Intelligence Agency (NIA), Ahmed Rufai Abubakar, for his role in Kanu’s “false imprisonment” in Kenya for eight days.
The lawsuit was filed by Kanu in Umuahia at the Abia State High Court.
For the violation of his rights, Kanu is seeking, among other things, N20 billion in general and exemplary damages.
Alloy Ejimakor, Kanu’s special counsel, told SaharaReporters that the lawsuit was brought about by newly discovered evidence that implicates Mr. Abubakar beyond the notorious extraordinary rendition.
-Advertisement -Ejimakor stated that “this is the first against Ahmed Abubakar, either in his personal or official capacity” of the numerous suits resulting from Kanu’s capture.
Ejimakor stated in the suit, which SaharaReporters were given a copy of, that the Claimant (Kanu) was falsely imprisoned without his consent;adding that the Kenyan government has explicitly and publicly denied any involvement in the Claimant’s arrest and detention in Kenya.
“I declare that the manner of arrest and detention of the Applicant in Kenya, his continued detention in Abuja, his subjection to physical and mental trauma by the Respondents, the inhuman and degrading treatment meted out to the Applicant amounts to a brazen violation of the Applicant’s fundamental right to dignity of his person and threat to life under Section 34 (1)(a) of the 1999 Constitution of the Federal Republic of Nigeria (as amended),” the Federal High Court’s ruling in
“Claimant hereby pleads this Judgment Order and the Judgment and shall rely on same at the trial of this suit,” he said.See Attachments 4 and 5.
“The Defendant has a public duty to act in good faith, not abuse his public office, and to ensure that the Claimant’s arrest and imprisonment in Kenya was carried out in accordance with the law,” reads the statement.
“The Defendant violated his statutory duty to only arrest and/or imprison the Claimant in Kenya in accordance with the law by falsely arresting and imprisoning the Claimant in Kenya.”
“The aforementioned false arrest and imprisonment of the Claimant has been condemned by the United Nations Human Rights Council, which through its Working Group on Arbitrary Detention rendered a binding Opinion directing the Defendant’s employer (the Federal Republic of Nigeria) to release the Claimant unconditionally and afford him the opportunity to seek compensation/reparations,” reads the UNHRC’s statement.See Annexure 6, from which the following material paragraphs have been seriatim culled as a document the Claimant will rely at the trial of this suit.
In the suit, the IPOB leader wrote, “No”:The following are among the reliefs that HU/293/2022 seeks:
“A DECLARATION of this Honorable Court that the Defendant amounted to false arrest and false imprisonment when he arrested the Claimant and imprisoned the Claimant at said location in Nairobi, Kenya.
“A DECLARATION of this Honorable Court that the Defendant falsely imprisoned the Claimant at the said location in Kenya in bad faith and/or abused his public office.
“AN ORDER of this Honorable Court directing the Defendant to pay the Claimant general and exemplary damages in the amount of N20,000,000,000.00 (Twenty Billion Naira only).”
“AN ORDER OF THIS HONORABLE COURT DIRECTING THE DefendANT TO WRITE AND DISTRIBUTE TO THE CREATOR A PERSONAL, UNRESERVED LETTER OF APOLOGY”The letter of conciliatory sentiment will be noticeably and strongly distributed full-page in two Nigerian Papers of public flow, to be specific:The Sun and Guardian newspapers.
“AN ORDER of this Honorable Court directing the Defendants to pay for this Suit.
“AND ANY ADDITIONAL ORDER(S) THIS HONORABLE COURT MAY CONSIDER FIT AND EFFECTIVE IN THE CASE.”