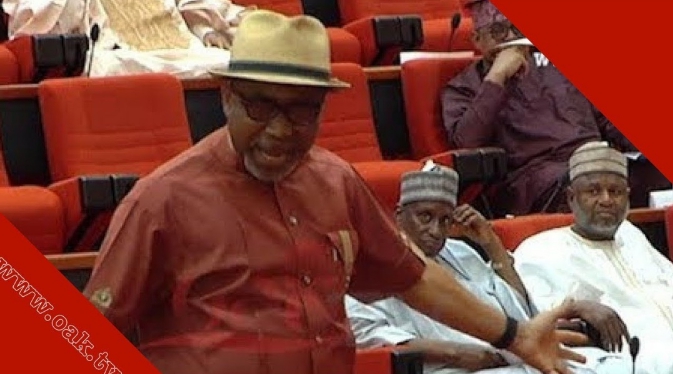 Abaribe said this on the floor of the Senate while explaining his recent ordeal.

He said: “On Friday 22nd of June, I was arrested at the gate of the Hilton Hotel while the International Press Institute congress was going on. I was taken to the office of the DSS by 11:30 in the morning and subsequently by 5pm I was taken to my house for a search of my residence. When we got to my house, it was at the point I was formally informed of why I was arrested,” Abaribe said.

“The search warrant that was used stated clearly that I’m being accused of sponsoring a proscribed organisation, IPOB, and so that the search was to look for evidence of such.

“So when I was in inside world, the first person that received me and who helped my transition from freedom to incarceration was the former governor of Benue state, governor Gabriel Suswam. He had been arrested on Tuesday, I was arrested on Friday. As at the time I was released last Tuesday, he told me he had not been told why he was arrested.”

Abaribe also said he had been reporting to the DSS headquarters since the court granted him bail.

The fiery lawmaker vowed not to be cowed into silence, disclosing his plan to challenge the action of the DSS in court.

“Let me also say Mr President that nothing has been found on the allegation that was made. Up till this moment, I am still on administrative bail by the DSS and so every morning, I have to report to the DSS but these things are going to be challenged (in court). What everybody has been asking me is where do we go from here?” he said.

“I want to crave your indulgence to tell every Nigerian where I want to go. I will do it by giving you Mr President and my distinguished colleagues, a quotation from the 26th president of the United States of America, Theodore Roosevelt.

On his part, Senate President Bukola Saraki said the ordeal of Abaribe was a sacrifice he had to make to deepen democracy in the country.

BUHARI VS ATIKU: The Drama That Ensued At The Presidential Election Tribunal