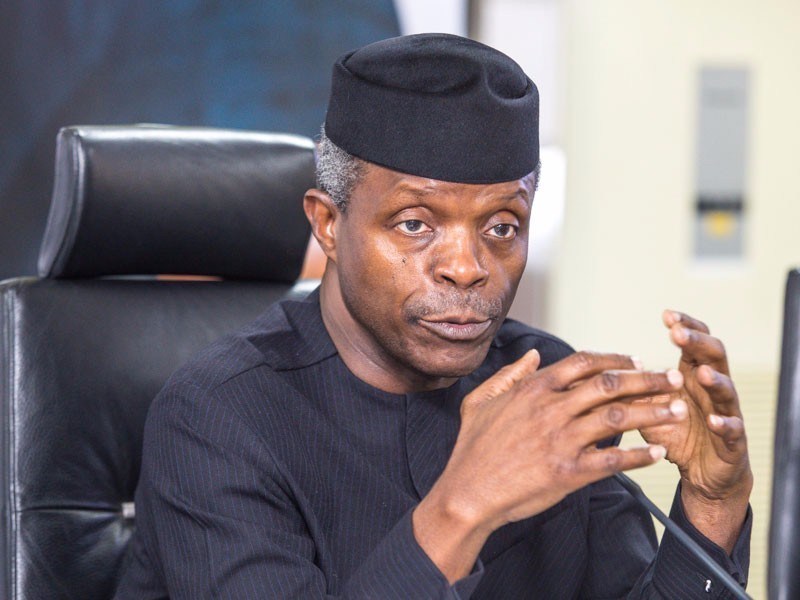 SaharaNews learnt that the long convoy of the vice president was attacked by political thugs allegedly hiding from the corner of one of the compounds and fired gun shots at the convoy.

They were said to fled immediately the act was perpetrated.

All Progressives Congress (APC) in a swift reaction Thursday night condemned the act in strongest terms while the ruling Peoples Democratic party PDP in the state dissociated itself from the act.

According to the statement by Rafiu Ajakaiye the media aide to APC governorship candidate, “We condemn the brazen attack today in Ilorin on the convoy of the Vice President Prof Yemi Osinbajo by armed PDP thugs, culminating in life-threatening gunshot injuries to at least two of our supporters while many others got seriously injured running for their lives”

“The vice president was at Isale Aluko suburb of Ilorin on a door-to-door campaign when some dare-devil gunmen opened fire at his convoy which included thousands of APC members and supporters.”

“In what is a reminiscence of the Offa robbery, this attack is the height of recklessness on the part of these street urchins who have long been empowered and armed by the discredited dynasty to terrorise our community and anyone who has contrary views to their amala politics.

” Coming just a day after two of our supporters were killed in Ojoku in the convoy of our senatorial candidate Arc. Lola Ashiru, this is becoming too much and the madness must stop. Going into an election with these thugs clearly on the loose is an existential threat not just to all of us challenging the misrule in our state but to the entire people of the state and their properties.

“We call for immediate arrest and prosecution of these thugs. We also demand investigations to reveal those who gave the orders for these deadly attacks. We call for all measures to be taken to ensure safety of lives and properties and sanctity of the ballot box in Kwara and beyond.

“No one’s political interest should be at the expense of human lives and their properties. We insist that a political contest is a contest of ideas and no one must be allowed to cow or kill others in the process.’

But the Peoples Democratic Party, PDP in Kwara State denied involvement of its members and supporters in the attack on Vice-President, Prof Yemi Osinbajo’s convoy .

Osinbajo was in Ilorin for the door-to-door campaign rally of his party, the All Progressives Congress (APC) and other activities of the party, when his convoy was attacked.

The Kwara PDP in a statement by its State Publicity Secretary, Mr Tunde Ashaolu, however noted that the incident was an intraparty affair involving members of the APC, arising from the endless crisis confronting the party.

Ashaolu explained the Vice-President had earlier visited Agbaji, the ancestral home of the Senate President, Dr Abubakar Bukola Saraki, where he went about his activities without any confrontation or crisis.

He added that crisis, however, broke out when Osinbajo got to Alanamu ward of Isale-Aluko, which is the base of two former governorship aspirants of the APC, Lukman Mustapha and Moshood Mustapha, who have been engulfed in superiority war.

The statement added,“It was also gathered that the money released to be shared among party supporters triggered the violence.

“Our party has no time for violence as we have been busy preparing for the presidential and national assembly elections coming up on Saturday as well as the governorship and State Assembly elections.”

“Once again, we emphasise that the PDP has no hand in the fracas and we reject any attempt by the APC to link our party to the crisis. We advise them to resolve the lingering crisis in their party.

“We also urge security agencies to thoroughly investigate this matter and not to indiscriminately arrest innocent people who have no connection with this unfortunate incident.”

Contacted last night, the police public relations officer of kwara state police command, Ajayi Okasanmi said he was yet to be briefed of the development.

“I’m just hearing from you,I’m yet to be briefed of the development” He said.

BUHARI VS ATIKU: Decide With Your Votes If The Poor Should Become Poorer – Aisha