Nigeria is no longer a country, North will continue to rule… 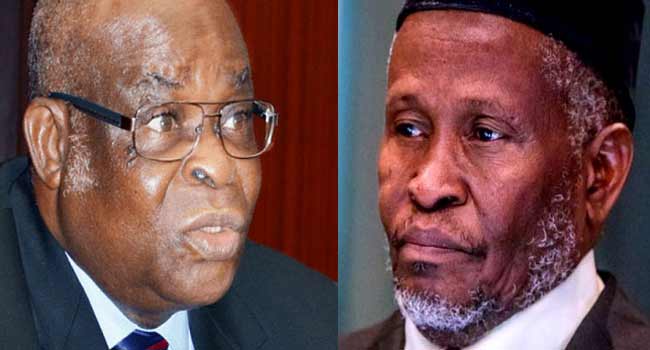 SAHARANEWS – The National Judicial Council(NJC) has ended its emergency Meeting.

SaharaNews correspondent who covered the meeting reports that the council issued a seven day ultimatum to both suspended Chief Justice of Nigeria, Walter Onnoghen and acting CJN Tanko Mohammed to respond to petitions against them.

Onnoghen was suspended by President Muhammadu Buhari, who said he was acting on an order issued by the Code of Conduct Tribunal (CCT).

The CJN was accused of non-declaration of assets.

Ibrahim Muhammad, the acting CJN, has also been given seven days to respond to a petition against him over an alleged breach of NJC rules.

He was accused of making himself available to be sworn in as acting CJN without the approval of the NJC.

The body referred a petition written against Danladi Umar, the Code of Conduct Tribunal (CCT) chairman, to the Federal Judicial Service Commission (FJSC).

The FJSC, his employer, will treat the petition and refer it to NJC for action is there is a substance to it.

The emergency meeting was presided over by Umaru Abdullahi, former president of the court of appeal, following the absence of both Onnoghen and Muhammad who are in the eye of the storm.

THE NJC STATEMENT Soyi Oye, the NJC director of information, issued a statement after the meeting.

“Council referred the petition against Hon. Danladi Yakubu Umar to the Federal Judicial Service Commission (FJSC) which is the appropriate constitutional body empowered to deal with it.

“In line with its procedure, Council also forwarded the petitions against Hon. Justices W.S.N. Onnoghen, GCON and I. T. Muhammad, CFR to them for their responses.

“In view of the gravity of the matters involved, Council abridged the usual response period from fourteen (14) to seven (7) working days for the Hon. Justices to respond.

2019: Enough is Enough, Atiku Petitions Buhari To US, France, Three Others