Paul Okoye Reveals Why He And His Brother Peter Okoye Did… 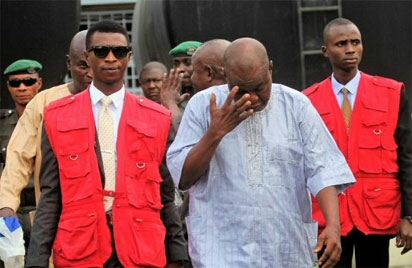 Justice Mohammed Idris, who has been elevated to the court of Appeal but, concluded the case on a fiat, handed down the sentence on the convicts, while delivering his judgment in the trial which spanned several months.

The court, however, adjourned the sentence of the convicts, until Friday (Today), to enable the first convict (Nwosu) appear in court.

The Economic and Financial Crimes Commission, EFCC, had preferred a criminal charge against the convicts and one Yisa Adedoyin, who had already been convicted by the court after he pleaded guilty to the charges.

The convict were said to have accepted cash gratification from a former Minister of Petroleum Resources Diezani Allison-Madueke, in the build up to the 2015 general elections.

The anti-graft Agency accused them of accepting the said gratification, which they reasonably ought to have known formed part of the proceeds of an unlawful act.

The convicts were re-arraigned after their co-accused (Adedoyin) had opted to change his plea by admitting to being complicit in the offences charged.

Delivering his judgment, which lasted for 47 minutes, Justice Idris gave a clear insight as to what constituted Money laundering, Conspiracy, as well as circumstantial evidence.

Justice Idris held that: “I agree with the prosecution that the manner, in which the transaction leading to this charge was consummated, shows clearly, a meeting of the minds.

“As stated earlier, the defendants showing their meeting of minds to commit the alleged offences, went to the bank, handed the cash to the second defendant, who conveyed same as instructed by the first defendant.

“They were not beneficiaries of any financial instruments or bank instrument, with which they can go to the bank to carry out such transaction; they made such cash payments without going through any financial institution and concealed, retained and used same.

“In the light of the forgoing, I hereby find the accused guilty of the charge,” the court held.”

2019 POLLS: The General Election is Capable of Breaking up Nigeria If Not well Managed – Abdulsalami Abubakar Warned