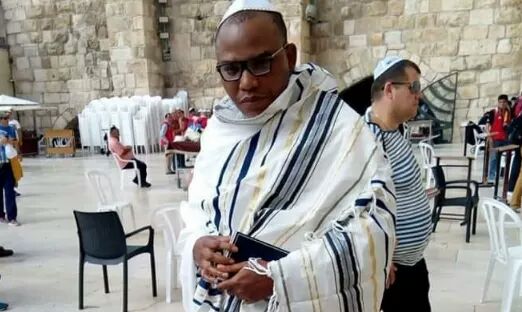 SAHARANEWS – Mazi Nnamdi Kanu, the Leader of the Indigenous People of Biafra (IPOB), has responded to criticisms of absconding Nigeria during the invasion of his home in Afara Ibeku, Umuahia, Abia State by the Nigerian army in September 14th, 2017 and the allegation of abandoning his followers in Nigeria.

It could be recalled that Mazi Nnamdi Kanu left Nigeria after the army invaded his home on September 14th, 2017, during the military exercise code-named; “Operation Python Dance II”.

Following the development, Kanu later resurfaced few months ago in Israel which stirred controversies as some Nigerians opined that since Kanu is the leader of IPOB, he should have faced the army rather than running away.

ALSO READ:  With the mendacity of Ananias in the New Testament, the APC’s 2023 presidential candidate Tinubu aims to manacle Biafrans in Nigeria like slaves on a slave ship.--Bruce Fein

Kanu, reacting during his live radio broadcast from London on Saturday said he ran away because he did not have any weapon to face armed military men who stormed his house.

According to him, he fled to Israel because it is the safest place for him to stay alive and achieve Biafra republic.

Kanu said “I want to ask those that criticise me about what they have done in their life.

ALSO READ:  JUST IN: The Conflict Of Reports On The News Of Nnamdi Kanu Father's Death

“Did you know that Nelson Mandela ran to Nigeria for safety during his time?

“I ran away because Jubril (Buhari) sent the military to my house to come and kill me and they expected me to stay and confront them, I’m unarmed just as IPOB members are unarmed group.

“No one in Nigeria has done what I have done. I came home and I confronted the army, I went to their court, I was unlawfully detained, I went home, conducted a rally and they sent their army to come and kill me.

ALSO READ:  Terrorist Ekpa, A Fulani Agent was part of those who gave ESN a bad image.

“Nnia Nwodo, Okezie Ikpeazu, Obiano and Umahi were the ones that signed and brought the army to kill me.

He further said; “Yes, I absconds to Israel because it is the safest place for me and I needed to stay alive and achieve the Biafra republic. Inform those who said I absconds away to read their history book, they will find out that all the popular human rights activists, both dead and alive ran away when there was a time to.”

Peter Obi not our member, stop linking him to us – IPOB warns Kwankwaso

JUST IN:If Britain Govt. refuses to recognize the BIAFRA referendum it will undo the…