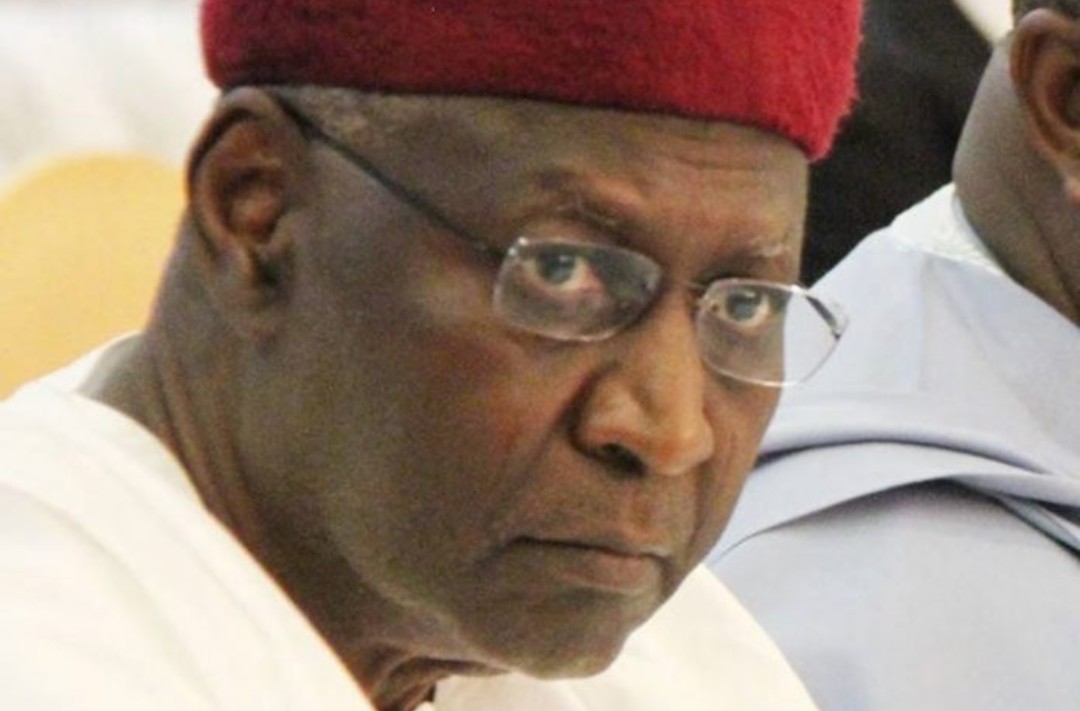 SAHARANEWS – The face-off between the National Security Adviser, NSA, Major General Babagana Monguno and President Buhari’s Chief of Staff, Abba Kyari, has attracted the attention of well-meaning Nigerians, including politicians, security experts and professionals who have raised the alarm over an impending collapse of the entire security architecture in the country if the development continues.

Recall that a circular from the Office of the NSA, which became public on Monday, last week, accused the CoS of hijacking the coordination of security leadership of the country, a role which was legally sanctioned for his office.

According to the circular, Kyari, contrary to protocols, convenes and chairs meetings with heads of defence, security and intelligence agencies with their supervising Ministers in attendance.

But in this report, we sought stakeholders’ reactions and opinions on the effect of the development on the nation, especially with regard to national security, and a direct verdict on who is right or wrong among the two political ‘actors.’

Hon. Ganiyu Johnson, member, Federal House of Representatives, representing Oshodi-Isolo Constituency II of Lagos, said the development was an indication that the Chief of Staff had taken over the job of the president.

According to him, ‘’The National Security Adviser is a constitutionally created office. It is an office that is created by the constitution with the power to oversee the security architecture of the country and to also advise the President on issues concerning national security. As far as I am concerned, the NSA should be in any meeting that has to do with security. The leaked memo clearly shows that the Chief of staff to the President has clearly taken over the functions of the President. The NSA reports directly to the president, or he is expected to report directly to the president. I do not think there is any need for him to report to the Chief of Staff on any matter concerning national security.

‘’It is therefore unfortunate that the Chief of staff, whose office is not specifically created under the constitution is doing such. Legally, I find this very obscure for the chief of staff to be having or presiding over meetings with the Service Chiefs without the knowledge of the NSA’’.

‘’The other point about this is the part of the memo that says that the chief of staff had repudiated and cancelled, and even to the extent of overriding the decision of the President. For me, that is treasonous, for the Chief of Staff to be discharging presidential authority which is exclusively vested in the President under the constitution. It shows that the president is being held hostage. That the president has totally neglected his constitutional duty.

But the PDP Zonal Publicity Secretary (South West), Ayo Fadaka said, “It confirms one thing; that Nigeria currently does not have a President. We don’t have a President indeed. What we have is a man who claims to be our president under whom operates a number of aides who fight each other to discharge responsibilities in his name.

“I must say that Nigeria is indeed in trouble because for once in our national life, it is now confirmed that we actually do not have a President who is alive to his responsibilities and upon whose deck the buck stops.

“My appeal to Buhari which I have been emphasizing is for him to please resign and let Nigeria be at peace again.’’

Similarly, a Chieftain of the All Progressives Congress in Kogi State, Dr. Yakubu Ugwolawo has asked President Buhari to take ownership of his government.

Ugwolawo who was the immediate past Chairman of Kogi APC Elders Council wondered how the President would allow this situation to continue, noting that it would affect the fight against insurgency in Nigeria.

He explained that Mr. Abba Kyari was emboldened by the President’s directive to political appointees to pass through the CoS in administrative matters, saying that the responsibility of the National Security Adviser (NSA) has been usurped in this context.

Ugwolawo insisted that governance has been in the hands of cabals, saying that the tussle was a reflection of Buhari’s weak administration.

“For sometime, the determining power in the Presidency revolves around Abba Kyari. With this tussle, President Buhari has not been in charge, and he should wake to reclaim his government.

“We can see reasons, government cannot defeat insurgents and all forms of banditry in Nigeria. This tussle is capable of weakening our soldier because a wrong person is sending out instructions to them,’’ he said.

Also, the National President of the Centre for Human Rights and Anti-Corruption Crusade, CHURAC, Alaowei E. Cleric, Esq said that the ‘’power tussle at the presidency between Abba Kyari, the Chief of Staff and Gen. Mungono Babagana, the National Security Adviser is unreasonable. It only points to us that there is a government within the government as Mrs. Aisha Buhari had earlier alleged.

‘’What more can one say? To me, the crisis of confidence in the presidency shows that Buhari is not in control of the government. It appears some unelected persons in the government are performing the functions of the president.

‘’It’s appalling that the cabals have chosen to pursue their personal interests to the detriment of the Country due to the apparent laxity of the man we elected to govern the Country.’’

A Warri based lawyer, Mr. Lucky Egboyi Esq was of the opinion that the tussle lends ‘’eloquent credence to the fact that we have no President in charge. Both of them belong to the presidency naturally. If we have a living President who is in charge, he should be able to call them to order. But unfortunately, the President has gone AWOL, hence the presidency’s free for all fight for supremacy of one official over the other.’’

A Bauchi based Radio analyst and an Author, Najib Sani stated that the friction was uncalled-for as everyone has his own defined duties.

Speaking with DAILY POST, Najib said the duties of the Chief of Staff was to mediate between the president and political appointees while the National Security Adviser deals with security issues and service chiefs.

He said the Security Adviser is a member of the Federal Executive Council, Security Council and State Council while the Chief of Staff coordinates the office of the president.

He, therefore, called on the president to summon the duo for a meeting with a view to resolving the conflicts.

” If the president does not bring them to order, the National Assembly should in the best interest of the nation intervene so that they do not tamper with issues that affect public security,’’ he said.

Comrade Abiodun Bamigboye, Acting National Chairperson of Socialist Party of Nigeria (SPN) condemned the ongoing rift over a frivolous issue of who convenes and presides over a National security meeting.

He said, “It is quite unfortunate that the so-called rift is happening between the two leading individuals that are directly connected with the question of how to strengthen the security network across the country especially at this critical period in the history of the country when the lives and property of most Nigerians can no longer be guaranteed. It will no doubt compound the terrible security challenges bedevilling the country at the present time.

“However, given the reported basis for this rift which is the question of who convenes and presides over the National security meeting, it is obvious that it is a rift that is not driven by how to ensure that the adequate protection of lives and property of Nigerian are guarantee but a mere struggle to ensure that they are in the best strategic position where their self-serving interest will continue to be protected and advance at the expense of the overall socio-economic interest of the Nigerian poor people.

“It is on this basis that I call on the leadership of the Nigeria Labour Movement, NLC, TUC, ULC including ASUU and civil society organizations like Joint Action Front, JAF, to join us in SPN and help build it as a mass political platform towards the process of forming such a pro-working people government.’’

The Waali (Chairman) The Muslim Congress (TMC) in Ogun State, Dr. Ibrahim Ogunkoya described the altercation between the NSA and the Chief of Staff as unfortunate.

He said that the feud will no doubt frustrate the success so far recorded in combating the insecurity in the country.

“We expect the two public officials to put the interest of the nation first before any other interest. They must immediately come to terms in the constitutionally backed engagement that will resolve the state of insecurity in the country than engaging in war of words”.

Also, a lecturer at the department of Mass Communication, Crescent University, Abeokuta, Mr Jamiu Folarin asked President Muhammadu Buhari to immediately intervene on the imbroglio before it snowball into deep crisis which the country will pay dearly for.

“President Buhari must show leadership by calling the officials to order and define their roles as it relates to the specific office. Silence is not golden at this moment, ” he said.

A former Lagos State Commissioner for Information and Strategy, Mr. Kehinde Bamigbetan said the face-off was as a result of poor communication among those in authority, saying ‘’The face-off between the National Security Adviser, NSA, Maj. Gen Babagana Monguno (rtd) and President Muhammadu Buhari’s Chief of Staff, Abba Kyari is as a result of lack of communication.

“It could have been avoided if there was good communication and good working relationship between the two.’’

But Hon. Jude Idimogu, Chairman House Committee on Wealth Creation and Employment, Lagos State House of Assembly said the tussle was needless now that Nigeria was searching for a viable solution to an overwhelming security challenge.

“The tussle between the two top officers is uncalled-for at this time when the President is looking for viable solution to the security situation in the country. There are protocols and each of them has his own role which I think should be complementary. If everyone followed the protocols and worked hand in hand, there wouldn’t have been any problem, ‘’ he said.