Controversy Over Couple’s Death In Enugu, As…

BREAKING: Obasanjo Faults Buhari’s Leadership, Says Nigeria May Not Survive As One Country 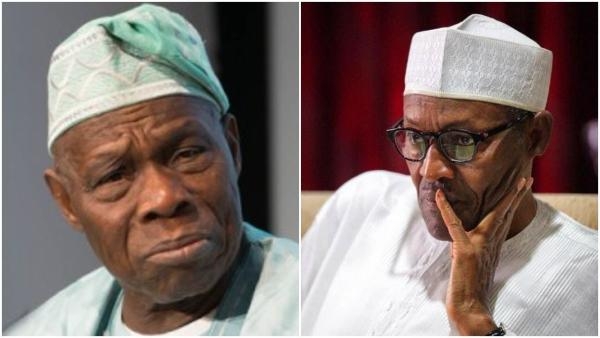 Obasanjo condemned the current state of affairs in his speech on Saturday at the Frederick Fasehun 1st Memorial Lecture.

Fasehun was a Yoruba leader and founder of the Oodua People’s Congress (OPC).

“If these factors are removed, Niagara falls to pieces. But for now, we can still make hay while the sun shines”, he warned.

Obasanjo, in his lecture, who pointed out several calls by groups and prominent Nigerians on insecurity in Nigeria, the gave “apologists” of Buhari’s administration six questions to answer.

He quipped: “Are all these people speaking the truth enemies of the government? Are apologists just telling the President what they believe he wants to hear? Do they believe that they are being fair to Nigerians and indeed to President Buhari? Do they remember that there is a day of judgement when they have to render account before God? I know for sure that God has the best in stock for Nigeria. And do they consider the present situation as the best for Nigeria?”

The former leader regretted that President Goodluck Jonathan’s efforts of a National Conference did not even get to the National Assembly.

“Today, the agitation has moved up to restructuring. Thanks to Buhari’s administration and its impunity and all. With the fractional political division, poor management of the economy, the non-protecting security and the politics of uncertainty in the land, we should not allow the restructuring agitation to degenerate to self-determination agitation.

“There is still a window of opportunity for us to nip in the bud a possible and indeed likely agitation for self-determination that will be violent, destructive and all-empowering. We have descended to lack of civility bordering on uncivilisation, indignity, mutual disrespect and crudity in the language of our debate, dialogue, discourse, address, comments and remarks across tribe, section, religion, region, ethnicity and community. If not halted, it will degenerate and poison the atmosphere to the tipping point or point of no return. If the issue becomes conceptualised as an issue of freedom or liberation, there will be no wall or gate to effectively prevail against it. Some well-meaning Nigerians are worried and understandingly so.

“Threats and intimidation do not build a community, they rather destroy. The language of love, knowledge, understanding, appreciation, consideration, compassion, cooperation, forgiveness and accommodation should be the language to build our nation. We should be honest and courageous enough to tell ourselves home truth for self-education and for the edification of our country. If we shirk our duties to our country because we are afraid of threats, intimidation, blackmail or being called names, we are not worthy of being called patriots or nationalists.

“While the unity and integrity of Nigeria will be defended with all that I can muster but surely not at the expense of my liberty, human dignity, freedom of choice, and human rights. I will not relent by exerting effort, ability and capability to make a contribution to the development and progress of my land of birth. If I allowed myself to be enslaved in Nigeria, I would have left a shameful legacy for my children and their succeeding generation forever. May God forbid!

“In that way, my existence in life would amount to naught. “If the hands cannot be swung”, the saying goes, “they are better held above the head perpetually”. My services to my country and to humanity would have ended in total failure as I would have lived not to carry out the divine mission of making better what I found. If I fought racial and tribal injustice and oppression in South Africa, Angola, Mozambique, Namibia and South Sudan tenaciously and successfully, it would be remiss of me to do any less in Nigeria. It is a divine duty and responsibility which must be attended to, if necessary.

“The Executive and the Legislature need to work together to establish a Constituent Assembly. The exercise must not be compromised like the present Constitution; it must have full legitimacy of ‘we the people’. Talking of a new Constitution, maybe we should try a hybrid Constitution of President and Prime Minister sharing executive power in a Presidential cum Parliamentary system. And before we descend any further, let me warn, from experience, those who are beating the drums of war and domination from all quarters. I joined late Bisalla, under General Hassan Katsina, to write the appreciation and the operational instruction for the Civil War.

ALSO READ:  Why I Decide To Build Islamic University In Buhari's Hometown---Okorocha Explains His Decision

“We estimated that Federal Government would suppress the Biafran rebellion within three months. To make allowances for the unforeseen, we allowed six months. But it took us thirty months, five times what we allowed for, and what is more, we nearly lost the war. And as a Field Commander at the end of the war, I can attest that we fought with all Nigerian tribes including Igbos against Biafra.

“And if after over ten years of fighting Boko Haram, the terrorist group is still waxing strong, let nobody out of self-delusion think that a war of self-determination by one or more geopolitical zones of Nigeria with the present disenchantment would be easily suppressed by the rest of what may remain of the country. Some will fight to the last drop of the blood of their group rather than suffer the indignity of slavery, oppression, domination and atrocious injustice in the land of their birth and the only one that they can call their country.

“If Boko Haram can get an outside support, any geo-political zone opting for self-determination may equally get an external support. War may not necessarily go as planned, estimated and predicted. Everything must, therefore, be put in place to avoid a war, the end of which no one can precisely predict. There is no assurance that Nigeria can survive a second civil war. But rather, we should seek political solution and avoid a destructive civil war. “

CORONAVIRUS: Another Patient Attempts To Escape From Quarantine Facility In Lagos

JUST IN: (VIDEO) Swearing In Public Officials With Juju Will Stop Corruptions In Nigeria – Senator Okorocha