BREAKING: Drama In Kogi As NCDC Officials Refused To Be…

Davido is busy campaigning for his uncle Ademola Adeleke… 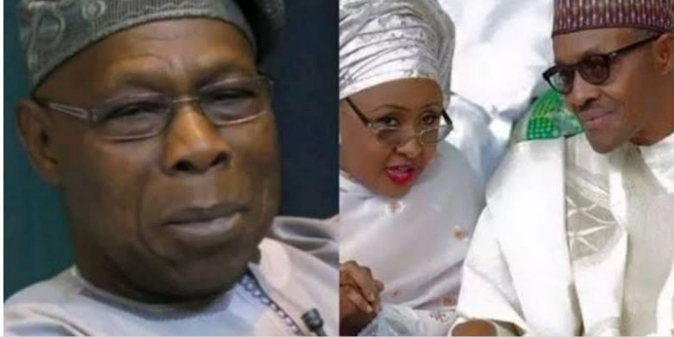 SAHARANEWS – Former President Olusegun Obasanjo, on Monday, advised wife of the President, Mrs Aisha Buhari, to as a matter of urgency engage her husband in “the other room talk” in order for him to know the true position of the state of the nation.

Mrs Buhari had recently raised the alarm on how social intervention programmes for vulnerable Nigerians had failed in the North and the wanton killings of Nigerians by bandits.

Obasanjo, who commended Mrs Buhari for speaking out her mind, said, apparently, the President’s wife had not adopted the bedroom approach to get her husband’s attention to the issues.
Noting that in recent time, Mrs Buhari had spoken about her displeasure with how her husband’s government was being run, the latest being the challenge to security agencies to find solution to the banditry in the country., the former President said she should engage in pillow talk to draw Buhari’s attention to the issue.

Obasanjo, who played host to the Editorial Board of a social media platform, “Penpushing Media”, at his Olusegun Obasanjo Presidential Library (OOPL) Boardroom, advocated more advocacy and sensitisation to get the desired change in the country.

In a statement by his Media Aide, Kehinde Akinyemi, Obasanjo added that the media also played crucial role in the mission to turn the country for better.
Obasanjo said the advocacy would raise awareness, “and we have to put all things on table to address these problems. Mind you, we have to be sincere and genuine with ourselves.

“It is nice that President’s wife is talking, I think she did well, and may be she should also have a pillow talk with the President.
“I believe every Nigerian family, individual, group is entitled to livelihood. It is the responsibility of all to make sure we have a dignified life. That should be our aim collectively,” he said.

Earlier in her speech, Chairman, Editorial Board of Penpushing Media, Mrs Funke Fadugba, said the visit was to intimate the former president with the programme of events for the Third Anniversary Lecture of the organisation scheduled to hold July 19.
She said that the anniversary lecture with the theme, “Political Evolution and Multi-party Democracy: Education to the Rescue”, had become imperative in view of the developments in the country.

ALSO READ:  NASS Invitation: Buhari Is Afraid, Has Nothing To Tell Nigerians—PDP

Fadugba said the role of speaking “truth to power” by Obasanjo cannot be overemphasised, “and, with the statements by the Mrs Buhari, “these are commendable efforts, but, one wonders what is really happening. The lecture, it is our belief, will go along way to bring the change this country deserves,” she said.