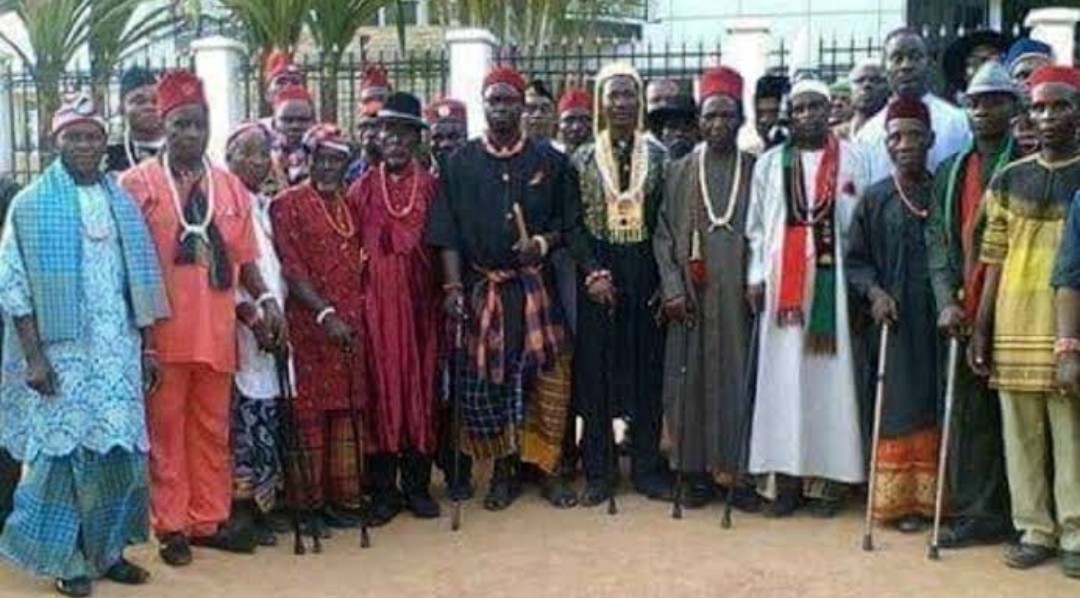 SAHARANEWS – There have been many assertions and perceptions as to whether or not Ogoni people are Biafrans, and if Biafra Referendum is conducted today will Ogoni people vote for Biafra?

Well, as a true son of Ogoni and a bonafide citizen of Biafra, let me update you with my findings so far.

First of all, Biafra  originated from the west coast of the old eastern region.

It will interest you to note that those who signed the Biafra trade agreement in the 18th century were all from the coast namely,……
Chief Reuben Nkane,
Chief Dappa Biriye
Chief Ogoloma Ogan in 1836.
However, distortion of history has made some of us deny our identity.

REPORT FROM THE ELDERS

Meeting with the paramount ruler of Gokhana kingdom, a veteran of the Biafran army name withheld, took time and recounted his experiences in the genocidal war against Biafrans from 1967-1970. He stated that Biafra was never for Igbos alone. In his words, “Biafra is our home. We fought for it, we fought vehemently for that nation. I and my elder brother fought under 8th battalion second division Biafran army. My father was a commander of the biggest training camp in the second division Nesuru, Umuekwe. In the Biafran army, he was the only one General Ojukwu permitted to form a special force in Biafra, so it pains me when people talk about Biafra as if it is an Igbo thing”.

ALSO READ:  Man dumps fiancee for not bleeding the first time they were intimate

At this point, I was just looking in awe of the revelations, but to my greatest amazement there were bunkers within the area which were used to fight for Biafra right there in Ogoni land. But he, however lamented that when the roles are called for Biafra heroes today, the contribution of the Ogonis are not recognized.

He further lamented that the balkanization of our region is the real reason for the continual suffering of the people of Biafra, stating that if region was united, the Nigerian government would not have killed Ken Saro Wiwa and eight others some years ago, adding that unity is something we must rebuild, because our unity is what they fear.

Meeting with Chairman, Council of Chiefs, Gokhana (name withheld), also narrated his story on how he fought viciously to making sure that Biafra came to reality; stating that they would have won the war despite Nigeria backing by Britain, Russia and Egypt but decried the epidemic of sabotage as the most cogent reason why the war was lost.

In his words, “we are not ignorant of the Biafra struggle and Biafra was never an Igbo affair”

At this point, tears ran down my eyes when he went into his house and brought out his Biafran army ID card to further buttress his story.

The elderly Ogoni statesman, also revealed that Nigerian troops had deceived his people during the war, to believe that Biafran soldiers were their enemies. “We fought on the Biafran side with Ojukwu. When the Nigerian government saw that the Biafran troops were overpowering them, they deceived my people, they disguised themselves as Biafran soldiers and burnt parts of our villages, which made our people believe that Biafra troops of Igbo extraction, were our enemies, we are Biafrans”.

Furthermore, the chief also lamented the oil spillage and the unending suffering of the Ogoni people and Biafrans in general.
He therefore blamed the disunity in our region as the major source of our problems, but that if we could reunite now, to get Biafra is difficult but not impossible, adding that we have suffered enough.

So you can see that Ogoni people are Biafrans and will still fight for her freedom. Stay updated as we will be bringing you more updates from Ogoni land as we continue on this mission work.

“Fulani Owns Nigeria And Will Rule Forever, We Will Use Our Security Outfit To Checkmate Everyone” – Miyetti Allah