Buhari met Nigeria as one, but allows Fulani bandits to rule… 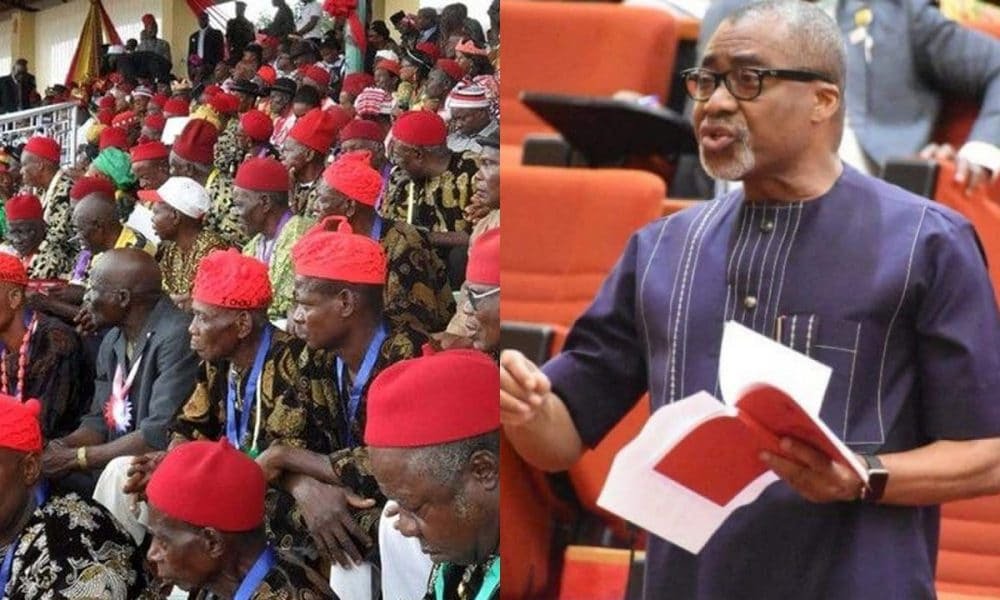 SAHARANEWS – The Ohanaeze Ndigbo worldwide, on Monday dismissed the controversial call by Senator Enyinnaya Abaribe on President Muhammadu Buhari to resign from office for alleged failure to provide adequate security across the country as selfish and handiwork of a fifth columnist

It also accused Abaribe who represents Abia South Senatorial district of having a disconnect with the Igbo apex socio-cultural organisation.

Ohanaeze said Abaribe’s action was a personal political gimmick designed to manipulate the conscience and emotions of the citizens for his personal gains.

SaharaNews recalls that last week Wednesday, Abaribe called for Buhari’s resignation on the floor of the Senate, claiming that Buhari has failed on the security contract he struck with Nigerians upon which he was elected in 2015.

The lawmaker explained that the main reason for Buhari’s election in 2015 and even re-elected in 2019 was his claim that as retired Army-General, he has the midas touch to arrest the festering security challenges in the country.

Abaribe, therefore, demanded that Buhari resigns from office as there are still unabated cases of insecurity in the land.

But Ohanaeze, the apex socio-cultural organisation from the South-East, the lawmakers regional homeland, described his legislative action as an affront on Ndigbo laced with the behavior of a fifth columnist.

This backlash was contained in a statement signed by the Secretary General, Dimm Uche Ukwukwu and made available to newsmen in Abuja.

Further, the group explained, “The call by Senator Enyinnaya Abaribe on President Muhammadu Buhari to resign from his position as President and Commander-in- chief of the Federal Republic of Nigeria is an affront on Ndi Igbo worldwide and Nigerians at large.

“The Senator who represents Abia South Senatorial District at the Senate has lost touch with the aspiration of Ndi Igbo having lost out in the power circles at the centre, hence he seeks to manipulate the conscience and emotions of Nigerians for his personal gains as though he has preferred a solution to our problems as a nation just to drive his own personal agenda.

“Assuming without conceding that Buhari resigns, it means Osinbajo will become president automatically against Igbo interest. So who is Enyinnaya Abaribe working for? How does his actions serve the interest of Ndi Igbo whom he is representing?

“It is no longer news that when kidnapping went to its peak in Aba, the commercial nerve centre of Abia state when Osisikankwu reigned supreme, ransoms as low as five thousand Naira was paid. Today peace has returned to the South-East and South-South under the President Muhammadu Buhari administration.

“Regrettably the North-East is still being battled to outrightly free it from Boko Haram which started under the PDP government where Abaribe belongs.

“He should have been the one along with his party to apologise to Nigerians for their inability to stop Boko Haram before Buhari took over.

“Today Enyinnaya Abaribe has within his personal right stood against the Buhari Administration as an arch opponent, yet, Buhari has won his election twice in 2015 and 2019 without the contribution of Abaribe.

“Ohanaeze Ndi-Igbo worldwide, therefore, calls on Ndi Igbo to continue to support the Buhari presidency until 2023 when he will hand over power to Ndi Igbo for the good of Nigeria and in the interest of all in the spirit of unity, patriotism and nationalism”.