2019 POLLS: El-Rufai Threats, Election Set To Be Bloody As…

BREAKING: Okorocha’s Certificate Of Return Threatened As INEC Opens Another Can Of worms 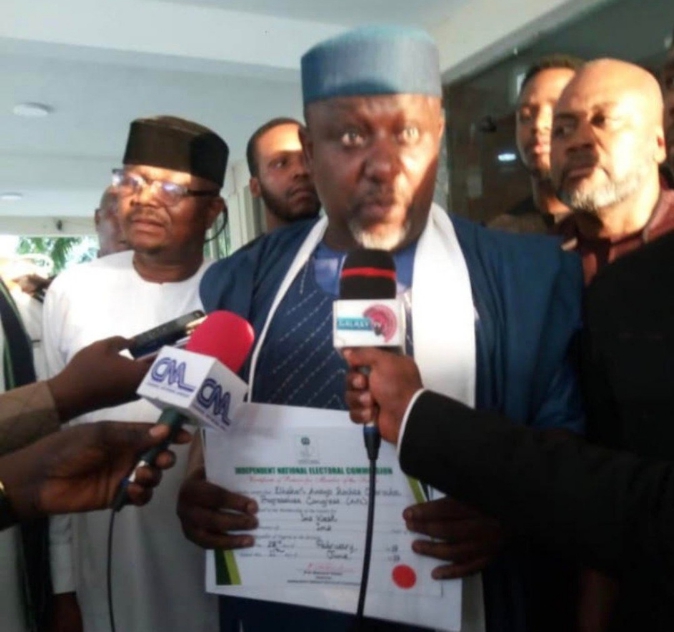 SAHARANEWS – The nation’s electoral umpire, the Independent National Electoral Commission (INEC), has given an explanation on why it made the decision to appeal the FCT High Court ruling which had directed the commission to issue a certificate of return to Rochas Okorocha.

Despite the stance taken by the electoral body, the commission issued a certificate of return to the former Imo State Governor, on Tuesday, as winner of the Imo West Senatorial election.

Festus Okoye, a National Commissioner of INEC had revealed via a statement released on Tuesday night, that INEC issued Okorocha the Certificate of Return as it was compelled by the High Court ruling to do so.

INEC has however, stated that it is going to appeal the judgment in view of the “likely consequences of this judgment for our electoral system in particular and our democracy in general.”

It was reported by SaharaNews on Tuesday that Okorocha had received his certificate from INEC, just some few hours after the ninth assembly was inaugurated.

It will also be recalled that the clerk of the National Assembly, Mohammed Sani-Omolori, omitted Mr Okorocha’s name as he reeled out the names of eligible Senators-elect.

As a result, Okorocha was not able to partake in the ceremony. He was on the two elected Senators who were unable to exercise their franchise during the election of the Senate leadership.

INEC had withheld Okorocha’s certificate of return and refused to acknowledge his victory, after the returning officer of the Imo West Senatorial elections, Prof. Innocent Ibeabuchi, stated that he had declared Okorocha as winner of the polls under duress.

Justice Okon Abang of the Federal High Court, had however, set aside the decision of the commission, stating that the decision taken by INEC was an act of “lawlessness and a complete nullity.”

Okorocha was further affirmed as the winner of the polls by Justice Abang who then directed INEC to reverse its earlier decision.

INEC had on Tuesday responded by complying with the ruling of the court albeit grudgingly as the commission said that it had “reservations” for the ruling, saying that it would appeal the judgment of the FCT High Court.

ALSO READ:  I support Muslim-Muslim ticket, but I will leave APC & fight against them if they do anything that will harm the Christians —Femi Kayode

The Full Statement of INEC as obtained from PREMIUM TIMES is stated below:

Amongst the memoranda considered is that concerning the judgment on the Imo west senate district by the federal high court Abuja. The commission decided to:

To comply with the court judgement by issuing a certificate of return to the plaintiff, Rochas Anayo Ethelbert Okorocha in compliance to orders of Hon. Justice O.E. Abang.

Appeal against the said judgment.

In arriving to this decision we also took into consideration the orders issued by two high courts in Owerri on May 23th and another issued on June 11th restraining the commission from issuing the certificate. It is noted that both are interim orders issued ex-parte and not final orders of the court.

In obeying the judgment, the commission is demonstrating its longstanding commitment of complying with all orders of the court, including those with which it may have reservation.

However, the commission must put on record its very profound concerns about the likely consequences of this judgment for our electoral system in particular and our democracy in general. Obviously, persons who seek elective offices could perceive in this judgment as an irrelevance of due process and acting within the law.

It is not farfetched that some of them could in future disregard laid down processes, including voting, arm themselves and mobilize thugs and compel returning officers to declare them elected, irrespective of the true outcomes of elections. Moreover, it may become increasingly difficult for the commission to convince its official that they are safe to carry out their legitimate functions without being harassed, held to ransom or visited with bodily harm.

The commission would like to seize this opportunity to restate its commitment to due process and obedience to rule of law in its dealings with all parties and candidates. We assure Nigerians that we will not waiver in our determination to enthrone a credible electoral process in Nigeria.