JUST IN: IPOB’s call for election boycott is…

BREAKING: Once you join APC, you become righteous and your sins are forgiven – Oshiomhole 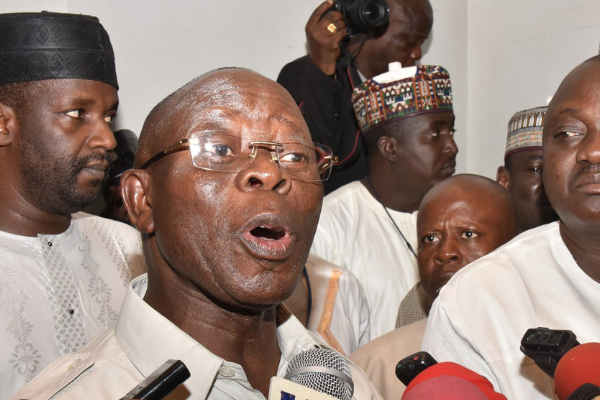 Adams Oshiomhole, national chairman of the All Progressives Congress (APC), says sins are forgiven when politicians join the party.

He made this statement on Thursday while speaking at the APC presidential campaign in Benin while welcoming new members to the party.

“I’m told that there are a lot of senior people from PDP who have decided to join forces with President Buhari to take the broom to sweep away PDP to continue to ensure that APC continues to preside over Nigeria,” he said

ALSO READ:  Ghana Dare Not Demolish Nigeria's High Commission If We Had A President - Fani-Kayode

“It includes my own brother and friend Henry Duke, he is the former organising secretary of PDP. We also have former vice chairman PDP and leader of PDP Edo North, in fact, once you join APC, all your sins are forgiven.”

Oshiomhole, who is the former president of the Nigeria Labour Congress, urged the crowd to support the second term ambition of President Muhammadu Buhari.

“Any Atiku, who says that he wants to enrich his own friends at the expense of the masses, PVC fire. Note it, I didn’t curse him. You’ll just vote them out and vote in Buhari. Once you do that, in the next four years, you will see the difference between 16 years of PDP and Buhari’s eight years.”

The All Progressives Congress (APC) held campaigns in Delta and Edo on Thursday.