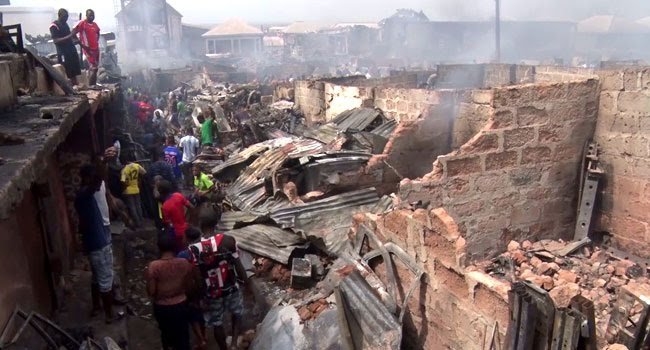 The News Agency of Nigeria (NAN), however, learnt that the deceased, who was the chairman of Zone 11 in the market, and was identified as G.O.D, did not die in the inferno.

He was said to have slumped in the market “after seeing that his five shops were completely destroyed by the fire.”

He was reportedly rushed to a private hospital in the area but was said to have died later.

It was gathered that the fire, which destroyed goods valued at millions of naira, started around 1.30 am.

Mr Okadigbo, an Assistant Superintendent, said nobody died in the fire because it occurred in the night, when traders had all retired to their homes.

He said, “No life was lost in the fire, but the chairman of Zone 11, one Mr G.O.D, slumped after seeing his five shops razed down by the fire.

“He was rushed to the hospital but later gave up the ghost.”

He said the fire destroyed so many shops and goods because of the highly inflammable nature of the goods sold in the market.

The NSCDC spokesperson said that the fire was put out by men of the Anambra State Fire Service, assisted by operatives of other sister-security agencies.

He said that the cause of the fire is yet to be ascertained but suspected it could either come from an electrical fault or a wildfire from the neighbourhood.

Meanwhile, the state Commandant of the corps, David Bille, has expressed his condolences to the leadership of the market and traders, who lost their goods and other valuables, as well as the bereaved family.