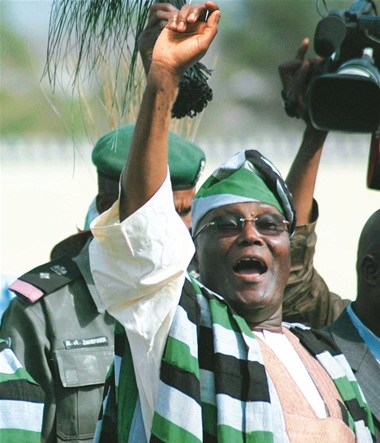 SAHARANEWS – Thirty-four political parties in Ogun State under the aegis of the Coalition of United Political Parties (CUPP) have adopted former Vice President, Atiku Abubakar, as their candidate for the February 16 presidential election.

Rising from an enlarged meeting held on Thursday at the Sagamu residence of Gbenga Daniel, a former Governor of Ogun State and Deputy Chairman of the PDP Presidential Campaign Council (South), the leadership of the political parties and their candidates at all levels unanimously agreed that the All Progressives Congress (APC) had failed in its electoral promises to the people.

Addressing the gathering, which also had the representatives of Afenifere, the Pan-Yoruba socio-cultural group, the Igbo, Hausa and South-South communities, as well as the National Union of Road Transport Workers (NURTW), Chief Razak Eyiowuawi, the National Chairman of the Peoples Party of Nigeria (PPN) and Assistant Secretary of the Steering Committee of CUPP, said the main aim of the body is to “save Nigeria from insecurity, violence and hardship which has become the order of the day and the only way out of the impending danger is to vote out the ruling party by coming together as one united front to usher in a new administration”.

Speaking on behalf of the Labour Party in Ogun, its former Chairman and House of Representatives candidate, Niyi Osoba, said it would be “shameful if APC returns to power under the leadership of President Muhammadu Buhari who has constantly exhibited lack of capacity to govern”.

In his remarks, Chief Tayo Onayemi, a former local government Chairman and a chieftain of the Alliance for Democracy (AD), stated that the “incompetence of the Buhari administration is very conspicuous as a government, which has been operating as a failure since inception which calls for a change”.

Other leaders of respective political parties took turns to speak at the occasion and charged their members to vote for Atiku.

In his remarks, Gbenga Daniel thanked the leadership of the coalition group for their support.

According to him, the current situation in the country calls for a radical departure from the status quo and this could only be achieved through collective efforts and engagement of all well-meaning Nigerians, irrespective of their political inclinations.

His words: “The coming election will be very close, hence everybody’s vote matters. What you have done today has further driven home the decision by 47 political parties throughout the federation which had earlier pledged their support for Atiku Abubakar at the national level.

“It will be recalled that the current government based its campaign on three major issues of provision of security, fighting corruption and improvement of the economy none of which they executed as we speak. Instead, they revised the fortunes of the country from one of the largest economies in the third world during former President Jonathan’s era to the poverty capital of the world according to global statistics.

“It has come to a stage where we have to rescue the country and this cannot be successfully done by one political party but a joint effort of all. It, therefore, becomes expedient to present a formidable united front to wrest power form the incumbent party, APC.

“The choice of Atiku as the preferred candidate is germane because everybody will have a sense of belonging in the government of inclusiveness of the PDP under the watch of the former Vice President Atiku who has promised to restructure the country on assumption of office.”