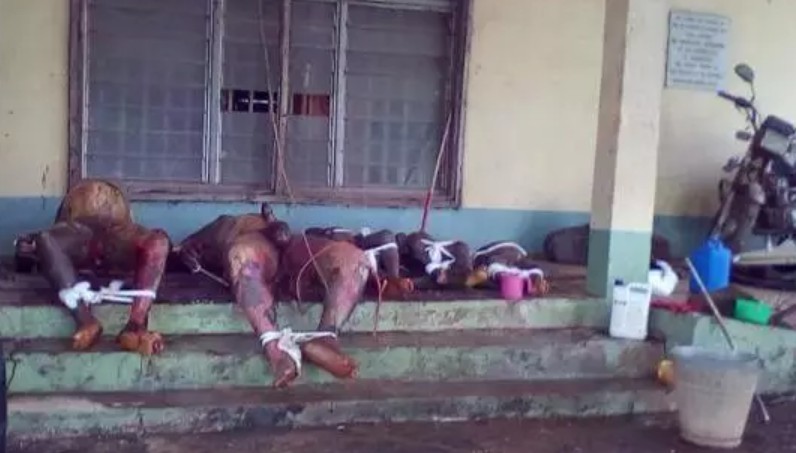 SAHARANEWS – Residents of the Amaokpo suburb of Nike in the Enugu East Local Government Area of Enugu State were in tears on Thursday as the corpses of five members of a family, who died mysteriously in their house, were recovered and deposited in the morgue.

SaharaNews gathered that the family of Onyekwere Chukwumalu of Eziowelle, Idemili Local Government Area of Anambra State, were last seen on Monday and were discovered dead on Wednesday morning with their skin already peeling off.

It was learnt that neighbours did not know of their death until a building contractor, who worked with Onyekwere, went to keep an appointment with him and found the house locked but the family head’s vehicle was parked outside.

Because there was no response when the contractor called, he was forced to move closer and discovered the corpses of members of the family in a heap as if they were praying.

ALSO READ:  Daughter Stabs Mother To Death After Nabbing Her In Bed With Husband

Our correspondent, who visited the National Orthopaedic Hospital, Enugu, where the corpses were deposited, gathered that the incident shocked neighbours, who came together to break into the house to bring out the corpses.

SaharaNews learnt that the police personnel from Abakpa Nike; the Chairman of the Enugu East Local Government Area, Alex Ugwu; and the United Nations Rescue Mission visited the scene of the incident on Wednesday evening.

Eyewitnesses said in the process of bringing out the corpses, one of Onyekwere’s children, Arinze, 10, shouted ‘Jesus’ and was rushed to the University of Nigeria Teaching Hospital, Ituku-Ozala, where he is said to be responding to treatment.

Speaking to journalists at the NOH, the South East Zonal Commander of the United Nations Rescue Mission, Emmanuel Okoye, said someone informed the team about the incident that a man and his family members were found dead and they went to the scene.

Okoye said the team helped to evacuate the corpses to the mortuary since the police were nowhere to be found.

He regretted that the police, which were supposed to be at the forefront of the evacuation and were properly informed, were nowhere to be found.

Ugwu, on his part, said Onyekwere was a good man and wondered how he and his family members died in that manner.

Ugwu blamed the death on possible food poisoning since there was no generator in the house to suggest that it could be as a result of fumes from it.

“When I heard about the incident, I alerted the police and the state Ministry of Health to take charge. It was when the officials of the ministry were trying to evacuate the corpses that one of the man’s children sneezed and was discovered to be alive and he was rushed to the hospital,” he said.

The police spokesman in the state, Daniel Ndukwe-Ekea, however, said he was not aware of the incident and stated that he would get back to our correspondent.

“How did you get to know about the incident?  I will inquire and in 30 minutes’ time, you can call me back so that I will tell you my findings,” PPRO said.

Subsequent calls to his mobile phone were unanswered.