For far too long, Mazi Nnamdi Kanu & #IPOB have borne… 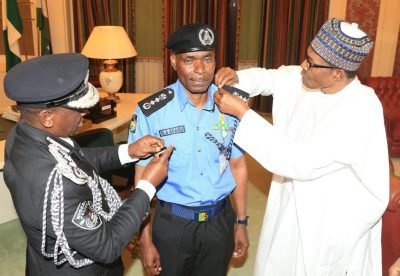 The Peoples Democratic Party (PDP) charges the acting Inspector General of Police, Adamu Mohammed, to immediately commence the re-engineering of the Nigeria Police to restore professionalism and adherence to rules of engagement in the Force.

This is just as the party berates the outgoing Inspector General, Ibrahim Idris, for a shameful and partisan tenure, which destroyed professionalism in the police and compromised the lives and security of Nigerians, adding that he must be held accountable for all the atrocities he committed while in office.

Ibrahim Idris will be remembered as the only IGP in our political history, who surrendered the responsibilities of his exalted office to the whims and caprices of politicians who share courtesies with the Buhari Presidency.

ALSO READ:  IMPOSTOR: This is what you get from an irresponsible government - Senator Shehu Sani

He defied the need to secure troubled areas and watched carelessly while an integral part of our nation was engulfed in bloody clashes.

Idris will also be remembered as that Police Officer, who had a penchant for framing innocent Nigerians with ridiculous allegations. Throughout his inglorious tenure, he functioned as the commander of the militant wing of the APC, just to retain his office and remain in power.

The PDP therefore urges the new Police boss to learn a lesson from the shameful end of Idris as IGP by immediately setting up the process of re-orientating and insulating the Force from partisan politics, while subjecting it to the tenets of democracy and the rule of law.

The PDP urges the police chief to avoid the pitfalls of the last IGP, who has gone down in history as the most corrupt, devious and reckless police officer to hold the post of the IGP in Nigeria.

The party further advices the new police boss to remove all templates of election rigging contained in the hand-over note that will be presented to him by Idris Ibrahim.

The new IGP must also urgently take steps to address the bastardization of promotion in the Police under the last IGP, where officers due for promotion were denied and only those endorsed by a cabal or who have enough money to buy their way through were promoted. This is in addition to immediately setting up a process that guarantee proper welfare of officers and men of the Nigeria police.

He must note that the whole world is watching him and we urge him not to fail the nation, which he owes his allegiance.

Now that Idris Ibrahim has gone the way of leaders disgraced out of office, the PDP counsels all enemies of democracy, including President Buhari’s compromised relation in INEC, Mrs. Amina Zakari, to take heed of the disgrace and infamy that await them at the end of their tenures.