How unknown thieves broke into court in Ogun, loot virtual… 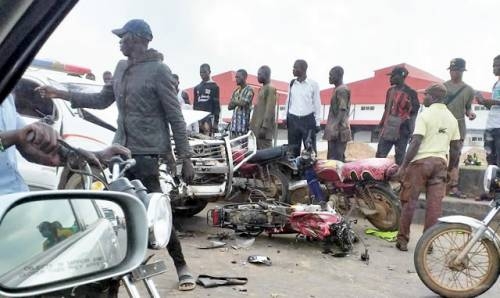 SAHARANEWS – Two persons were crushed to death by some policemen allegedly driving against traffic.

The incident happened on Monday on the Long Bridge end of the Lagos-Ibadan Expressway in Ogun State.

The yet to be identified persons were on a motorcycle when the incident occurred.

Eyewitnesses said the policeman ran away immediately without helping any of the victims.

Commuters and residents around rescued the victims but could only do little until the emergency response team arrived.

Oladele stated, “Three people were involved in the accident, one died and the two injured victims were rescued to the Lagos State Emergency Centre, Ojota.

“The corpse of the dead victim was deposited in the hospital’s mortuary.

“The suspected cause of the accident was route violation as the driver of the vehicle was speeding while driving against the traffic.”