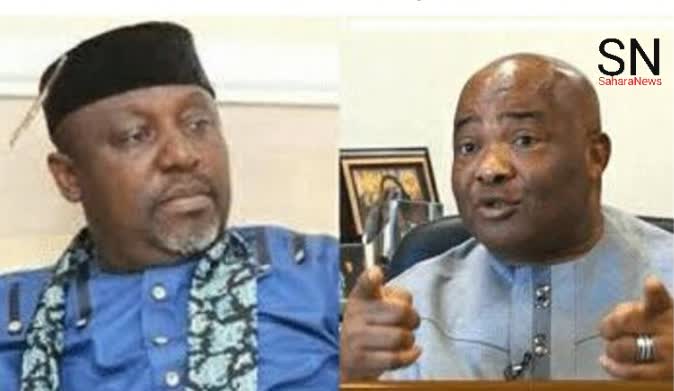 SAHARANEWS – Rochas Okorocha, the outgoing governor of Imo state, on Sunday, replied Senator Hope Uzodinma,the governorship candidate of the All Progressives Congress (APC) in the last general election, and Senator representing Imo West Senatorial zone, over his recent media attacks against him.
Okorocha decribed Uzodinma as a “shameless” politician who is a pliable tool in the hands of some politicians within and outside the state who are bent on ruining his political career. He said Uzodinma would do anything to please his political masters to be in their good books.

A statement signed by Mr. Sam Onwuemeodo the Chief Press Secretary to the governor, read that, “within one week, Chief Hope Uzodinma, the governorship Candidate of All Progressives Congress (APC), in Imo State, has had series of interviews in almost all the national newspapers. And his target in all the interviews was Governor Rochas Okorocha. He has also invaded the social media with his insults on the governor.

“Interestingly enough, the kind of courage and boldness Chief Uzodinma displayed or exercised in all his media outings against Governor Okorocha only showed that he has no shame. And he could do worst things if he has the opportunity”.

According to the statement, “Chief Uzodinma contested the governorship election in the State with the ticket of APC and he could not win in his own Oru East local government. He could not win in any of the 27 LGAs in the State, and never came second or third in all the LGAs but only came fourth and he has the audacity to be granting interviews and talking balderdash.
“He has only confirmed that he was only used as tool to destroy Imo APC. And they have promised him Ministerial appointment and that is the reason behind his current media Campaigns and to be listened to, he has to be insulting Governor Rochas Okorocha.

“Chief Uzodinma and co told the world that governor Okorocha had finished politically, that they were the ones holding the ace of APC in the State. And today, Nigerians have seen or known who holds the franchise of APC in Imo and in the Southeast”.

It continued that, “at least, the outcome of the 2019 election spoke volume. It showed that like Governor Okorocha had said, Chief Uzodinma didn’t contest the 2019 governorship election in the State to win. He only came to be a tool in the hands of those who wanted to kill APC in Imo and South-East in general for reasons best known to them.

“The 2019 poll also showed that Ugwumba Uche Nwosu is loved by Imo people to a very large extent and he was the most popular governorship Candidate. He won the 2019 election with the real votes of Imo people but INEC decided to announce someone with fictitious figures winner.

“Chief Uzodinma could not produce even one House of Assembly member. But Ugwumba Nwosu produced about eleven House of Assembly members, two Federal House of Representatives members and one Senator for Okigwe zone on the platform of Action Alliance, (AA). And all those who won election on the tickets of APC are all Governor Okorocha’s men.

“The truth is that falsehood does not endure. But truth endures. Even at the moment, only Governor Okorocha has the capacity to rebuild APC in Imo and in the South-East generally with the support of the AA Chieftains led by Ugwumba Uche Nwosu.

“In case men like Hope Uzodinma do not know, Governor Okorocha will outlive them, outlive their mischievous politics and their gang up. In their effort to destroy Okorocha’s politics, they messed up the entire State with their Collaborators.
Uzodinma had on Friday in an interview he granted the Nation Newspaper fired a barb at Okorocha by calling him a saboteur.

JUST IN: I Will Be President Of Nigeria – Rochas Okorocha Vows