OPINION: 9th NASS, Why The Devilish Plot to Ridicule and…

BREAKING: Senate Opposes The Planned Closure Of Enugu International Airport, Calls On Rotimi Amaechi To Return The Generating Sets He Removed From The Airport 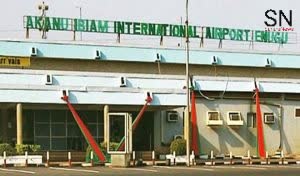 SAHARANEWS – The Senate on Thursday urged the Federal Government not to downgrade the Akanu Ibiam International Airport, Enugu.

The lawmakers also urged the Federal Government to rehabilitate the runway of the airport for the safety of passengers and aircrafts.

Senators also said government should take steps to complete the new terminal building of the airport and put it to use by local and foreign airlines.

Daily Trust recalls that the former minister of state for aviation, Hadi Sirika, had hinted that the Akanu Ibiam International Airport, Enugu would be downgraded due to imminent dangers.

ALSO READ:  JUST IN: Linking Us To Death Of Prophet Nwoko, Effort In Futility — IPOB

Adopting a motion by Senator Victor Umeh (APGA, Anambra) and 14 others, the senators urged the Federal Ministry of Transportation and relevant agencies to develop a source of water with the nearby Ekulu River for the use of the airport.

They appreciated the Enugu State Government for swiftly demolishing and ordering the relocation of Orie Emene Market, shutting down the nearby abattoir and ordering the immediate removal of the broadcasting mast and other illegal structures close to the airport.

ALSO READ:  UNBELIEVABL: 5 Christians To Die By Hanging In Yola For Self Defense That Resulted To The Death A Killer Herdsman

They equally called on the transport ministry to return the generating sets taken away from the airport to Port Harcourt, allegedly by former minister of transport, Rotimi Amaechi.