Muslim-Muslim ticket not to sabotage the Christians’…

BREAKING: “Some Policemen Did This To Me For Refusing Them Sex”, FUTA Student Cries Out For Justice 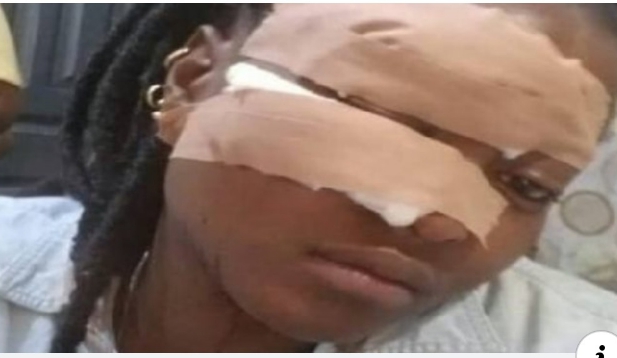 SAHARANEWS – A female student of the Federal University of Technology Akure, Ondo State, who was assaulted by some policemen and injured in the eye, has said that she was attacked by the men for refusing to have sex with them.

Speaking with SaharaNews on Tuesday, the student identified as Sheba Ogbu, said the incident happened at about 9:30pm on Monday along Oyemekun Road in Akure, the state capital.

Ogbu said she was coming from church when policemen in their patrol van accosted her.

She said they questioned her on where she was coming from, searched her bag and found nothing incriminating on her.

She disclosed that when they could not pin anything on her, the four security operatives asked her to follow them to a place where they would have sex with her.

According to her, she refused their advances and that was what infuriated the policemen, adding that they began to beat her and smashed her head on a stone.

The undergraduate and her family have threatened to sue the Nigeria Police Force for the assault.

Spokesperson for the Ondo State Police Command, Femi Joseph, said the indicted officers had been identified and currently being interrogated.

Earlier today, a video of Ogbu with a bloodshot eye made the rounds on the social media.

In the 15-second video, the lady was seen with blood dripping from her eyes while she kept saying “look at my eyes”.

There were four policemen seen in the video appearing unperturbed about the plight of the young lady.

“This Is An International Embarrassment, The Main Focus Of The President’s Trip To Japan Have Been Shifted And Attentions Directed To IPOB’s Misconducts” – Abba Kyari Rages

BREAKING: “They Will Pay With Their Bloods If IPOB Dare Attack Buhari In Japan” – Junaid Mohammed