2023: Why I will not impose my successor on Rivers — Wike 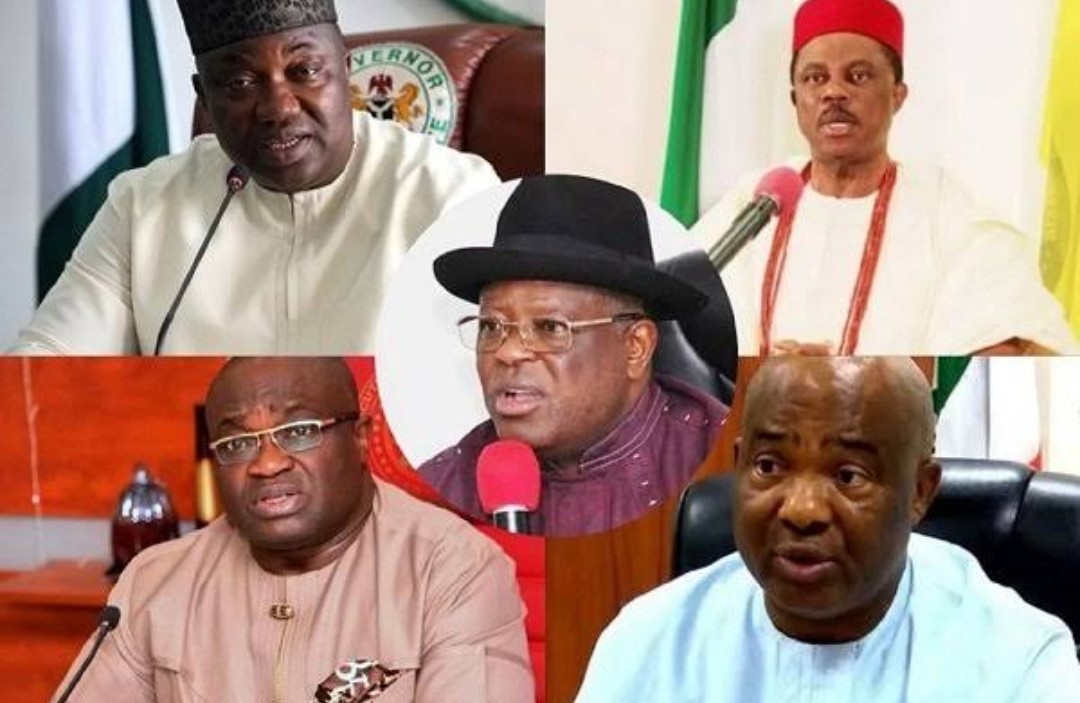 SAHARANEWS – The South East Governors Forum has expressed dismay that the Inspector General of Police allegedly reneged on its agreements on practice and composition for establishment of community policing in the zone.

The Chairman of the forum and Ebonyi Governor, Chief David Umahi made the disclosure at the end of its meeting in Enugu on Sunday.

The chairman said that the recent communication from the IG, Mr Mohammed Adamu, did not conform with the initial agreement reached with him during his visit to the Zone.

‘The South East Governors and their leaders request the IGP to revert to our initial agreement reached on Community Policing at Enugu.

“The forum agrees that all South East States House of Assembly should commence the process of enacting the state security laws in line with the South East Joint Security Programme.

“In the circumstance, we cannot begin implementation of it until the programme reflects our earlier agreement,”  he said.

On COVID-19, the governors urged Igbos nationwide to stay safe and obey all directives to contain the spread of Coronavirus (COVID-19).

According to him, the forum have directed all Igbos living outside Igbo land to obey all existing COVID-19 orders, Presidential directive on inter-state movement, World Health Organisation (WHO).

The governor said that the forum agreed to further engage the NCDC to scale up testing of Coronavirus in South East States.

The governors commended President Muhammadu Buhari, the Minister of Works and the Governor of Anambra, Willie Obiano on the extent of work at the second Niger Bridge,” he said.

On the economy, Umahi said the forum agreed to set up committees at the various states to work with Federal Government, World Bank, Central Bank of Nigeria (CBN) and Nigeria Sovereign Investment Authority (NSIA) on repositioning the economy in the zone.

He said they would work in their various programmes lined up to rejig the economy, especially in areas of Agriculture, Small and Medium Enterprises and solid minerals.

The Chairman said it agreed also to hold a virtual meeting with the Group Managing Director of Nigeria National Petroleum Corporation (NNPC) on the issue of linking South East State capitals with pipeline.

This, he said, should be done along with the pipeline programme of the Federal Government running from Imo to Lagos State.

Umahi disclosed that the forum agreed that Ohaneze should submit a working document in their next meeting on setting up of South East Stabilization Fund.

The forum also commended President, Minister of Aviation, the Governor of Enugu State and other governors of South East and the Committee headed by Mr Chris Okoye on the extent of work at Akanu Ibiam International Airport.

“We assure our people that with the progress of work at the site, we are hopeful that the Airport will reopen soonest subject to COVID-19 Federal Government Programme, “ Umahi said.

The governor he said that the next Executive Committee meeting of the South East Traditional Institution shall be hosted by Ebonyi State.

Other notable personalities at the meeting were Obi of Onitsha, His Majesty Nnaemeka Achebe, Oh Anezi President General, Nnia Nwodo and some traditional and religious leaders.