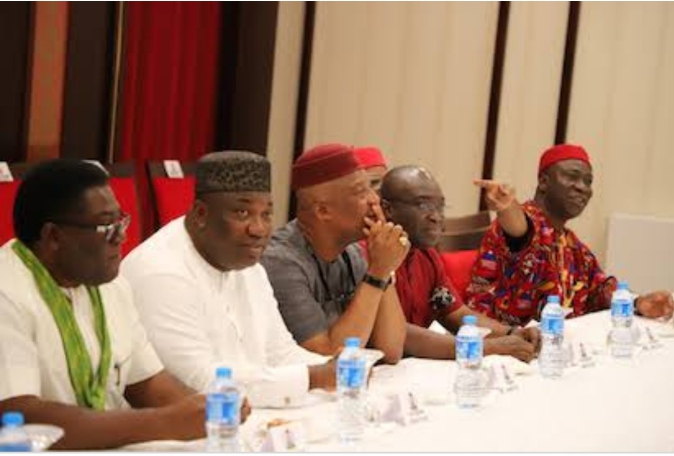 SAHARANEWS – Political leaders and other institutional leaders in the South-east geopolitical zone rose from an emergency closed door meeting in Enugu, yesterday with a resolve to fashion out a more sustainable and enduring strategy aimed at permanently checkmating the increasing spate of invasion of communities by suspected Fulani herdsmen in the zone.

The meeting which was attended by the Deputy Senate President, Ike Ekweremadu as well as Governors Ifeanyi Ugwuanyi of Enugu State, Dave Umahi of Ebonyi State and Okezie Ikpeazu of Abia State also had the presence of former Governors of Anambra and Imo States, Peter Obi and Ikedi Ohakim.

However, Governor Rochas Okorocha of Imo State and his Anambra State counterpart, Willie Obiano, were conspicuously absent. Some former governors including Chief Martin Elechi, (Ebonyi), Sullivan Chime (Enugu) and Senator Theodore Orji of Abia who were said to have been invited to the meeting were also absent.

No reason was given for their inability to attend.

But, addressing journalists at the end of the two-hours meeting, Ekweremadu said the meeting appraised developments in the last herdsmen attack in Enugu and resolved to find ways of ensuring that such attack did not take place either in Enugu or any other place in the South-east zone.

“We intend to put in place endurable measures so that such attack will not happen again,” Ekweremadu noted, while disclosing that the meeting expressed satisfaction with Ugwuanyi over the courageous way he handled the Ukpabi Nimbo attack which claimed scores of lives.

“The Governor of Enugu State briefed the meeting on the steps he has so far taken on that issue. He also told us that most of the people who fled the community in the wake of the attack had started returning and that nomalcy has been restored in the area. We are very satisfied with the briefing,” he said.

They also commended President Muhammadu Buhari for signing the budget and as well thanked the National Assembly for their efforts in resolving the budget impasse with the presidency.

Ekweremadu, however, urged that the budget as it affects the South-east should be implemented thoroughly especially in the area of roads.

“We suggest and urge the Federal government to ensure that the projects captured in the budget as it affects the South-east be given to reputable contractors. And we are going to monitor it closely especially as it affects our roads,” he said.

Ekweremadu also disclosed that efforts would be made to ensure that the governors who did not attend the meeting would attend the next one.

BREAKING: Jubilations For Okorocha As He Finally Smile Home With His Certificate Of Return