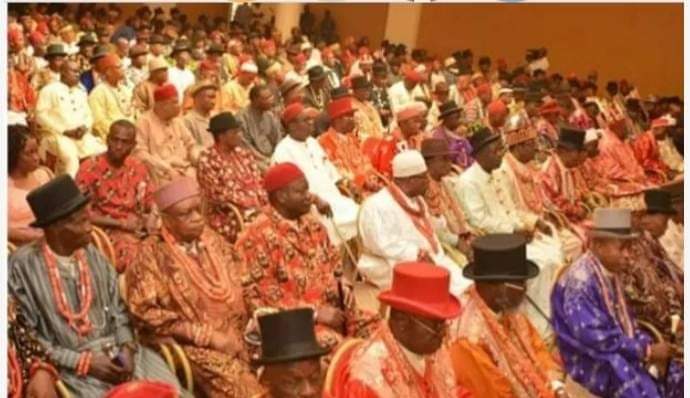 SAHARANEWS – Monarchs from the South-East and the South-South geopolitical zones of Nigeria have concluded that what is going on in the country have made Biafra an Unavoidable option for their people.

The traditional rulers made this statement during their condolence visit at Afaraukwu Umuahia country home of the leader of the Indigenous Peoples of Biafra, IPOB Mazi Nnamdi Kanu, to condole the family over the death of parents.

According to the monarchs, the people of the South-East and South-South have been made the targets and victims of bad government’s policies and misrule.

As they promise to support the struggles towards the actualisation of the sovereign state of Biafra, the monarchs appealed to the southeast and South South people of to join the struggle, adding that Nigeria is no longer trusted for the future of the geopolitical zones.

According to the source, Punch News, The Traditional Rulers “particularly urged the political elite to stop attacking Kanu but synergise with him towards the peaceful restoration of Biafra, pointing out that restoration of Biafra did not require another war but sustained peaceful agitation and unity of purpose.”

“The monarchs appealed to the United Nations, the United States and the international community to prevail on Nigerian leaders to stop the wickedness perpetrated against the people of the region by the cabal at the centre.

Spokesman for the monarchs, Gideon Ejike, said every prediction by Kanu about Nigeria had come to reality, thus confirming that Nigeria had no plans but perpetual enslavement of the regions.

Eze Ifeanyichukwu Okeke of Ekwulobia in Anambra State said, “Nigeria has expired and can no longer bind together as a united entity.”

The king of Alumili, the Ohazurumee VIII, HRM Onyenweal Igwuocha, condemned the Federal Government for treating the people of the old Eastern Region, particularly Ndigbo, as conquered slaves.”

He said, “We are here today to tell the nation that what we need is our nation because the nation is already before us. We are not Hausa, we are not Arewa, not Oduduwa and we cannot be them.

“So, you don’t force water and oil to be together. We cannot be together. So, I want the whole world and all the world power to listen and hear us.

“We can’t live together. We have been living for over 500 years and that is the reason the Ezes, the real owners of Biafra, land have stood up and said enough is enough! This thing has to stop and what we need is Biafra!”

The Public Relations Officer of the Council of Ndieze in Biafraland, HRM Eze Nnamdi Ochor, The public relations officer eulogied Nnamdi Kanu for his extra effort and sacrifices towards the restoration of Biafra, which, according to him, are the reasons why he lost both parents in a year.

His Royal highness also maintained that the IPOB leader, Nnamdi Kanu’s international diplomatic movement will certainly make Biafra a country of its own in no distant time.