BREAKING: Stop Calling For Restructuring, It Will Never Work In Nigeria – Emir Sanusi 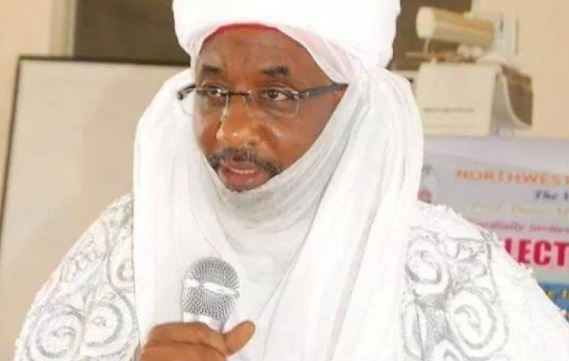 SAHARANEWS – The Emir of Kano, Alhaji Muhammadu Sanusi II, has said that the unending call for restructuring and its practice would not work in Nigeria, because it one of the fault lines being manipulated and exploited by some political elite for their selfish interests.

He said this Friday in Abuja at the 9th Triennial National Conference/Merit Award of the Ansar-Ud-Deen Society of Nigeria (ADSN) with the theme: “Justice, Equity and Peaceful Coexistence: Ideas and Reality in a Multi-Religious Nation”.

The Emir, represented by a Senior Lecturer of the Islamic Studies at the Bayero University Kano (BUK), Dr. Bashir Aliyu Umar, said the elites’ manipulation of the fault lines, including the restructuring has been major source of communal violence and insecurity in the country.

“The elites’ blind thirst for power has resulted in tribal and religious clashes, even though they are reducing in most part of the nation, but when one type of crisis reduce then another one will spring up. It is not as if we are pro- or anti-restructuring, but rather the restructuring has been turned into a fault line that is been manipulated and exploited by the elites.

“We have elite in the society that have received the best of care from the resources of the society. People of my age and those before me attended public schools from primary to university. Unfortunately, the elites that benefited from the system in the past have left public institutions to become vandalized, dilapidated and substituted it with a private education system that is affordable only to a very few.

“The health system has also been vandalized and now people have to go on medical tourism in India, Egypt, and Europe. The unfortunate thing is sometimes before you get the air ambulance the will of Allah will take place,” he said.

According to him, the elites that got power after the military, created a political class that instituted thuggery, election malpractices, corruption and destroyed the Judiciary, Civil Service and security agencies and that it is unfortunate that this has been made to become something that is perpetual.

ALSO READ:  JUST IN : You have reduced yourselves to political thugs against the defenceless Nigerians - Gov. Wike to Nigeria military

He said, “It is in fulfillment of one of the two principal objectives of the society, that the National Universities Commission (NUC) issued full certificate of operation to the Ansar-Ud-Deen University named Summit University, Offa, in Kwara State.”

Welcoming participants to the conference, the Northern States Council Chairman of the society,

Alhaji Najeemdeen Yasin, urged members to brace up for the challenge of making the Summit University a world class.