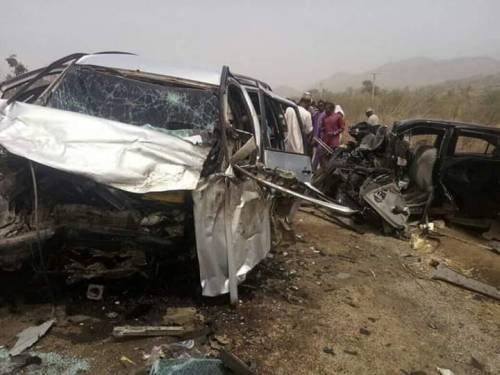 SAHARANEWS – At least 20 people travelling along the Bauchi-Maiduguri highway in Darazo Local Government Area of Bauchi State during the weekend reportedly died in a road crash.

It was also reported that more than 80 animals, likely meant to celebrate Sallah, also died in the accident.

Mohammed said he was aware of the incident but yet to get the full details.

However, Kamal said: “The incident happened late on Friday night around 10 pm. It was a head-on collision between a J5 bus and an 18-seater Hummer bus. “The J5 was coming from Potiskum, Yobe State, heading towards Bauchi. It was carrying goats while the Hummer bus was from Bauchi. They had a head-on collision which instantly started the fire that burnt 20 people beyond recognition.”

He added, “19 names were recognized by family members through the manifest in which they wrote their details at the motor park.”

He revealed that a mass burial was held for the deceased on Saturday.

When contacted, the Caretaker Chairman of Darazo LG, Garau Adamu, said the passengers came from different places and the accident occurred between Kari and Sade.

Adamu added that he would meet with the officials of Federal RoadsvMaintenance Agency (FERMA) after the public holidays in order to find the best way they can fill potholes on the road to avoid a future accident.

ALSO READ:  EXPOSED:Odumakin Was A Man Of Conviction, Buhari Mourns

UPDATE: 3 Policemen Murdered By Soldiers; The Captain Who Ordered The Killings Arrested

We Destroyed Nigeria When We Sabotaged Jonathan’s Government And Wrongly Forced Him Out, Now We Deeply Regret Our Actions – Timi Frank