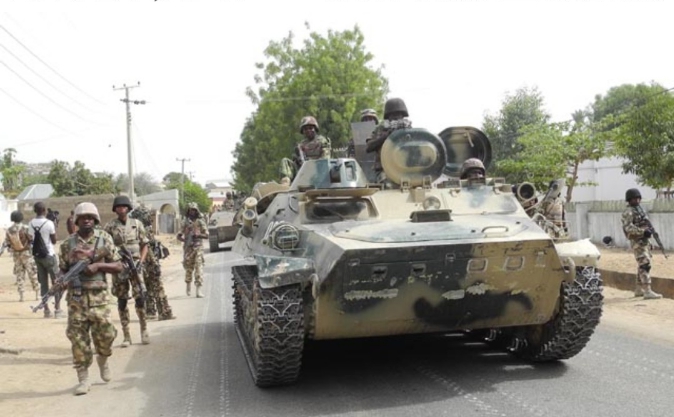 SAHARANEWS – The people of Gbaramatu in Warri Southwest local government area of Delta State have expressed concerns over alleged renewed military siege to their communities, expressing fears about another military operation.

The Gbaramatu Traditional Council of Chiefs, in a statement on Tuesday, warned that wild charge by military troops is capable of causing a breakdown of law and order in the region.

They urged President Muhammadu Buhari to restrain the troops.

“There is an urgent need for Mr. President to investigate the activities of the military in the Niger Delta region, as it is not within the confines of the rules of engagement and this may lead to breakdown of law and order in the region as it is happening in Gbaramatu kingdom,” Godspower Gbenekama, the council’s scribe said.

It was gathered tension has been rising in the area following last week’s failure by President Buhari to assent to the bill on the Nigerian Maritime University, which is located in Okerenkoko area of Gbaramatu.

It was not clear, however, if the alleged military operation and fear in the area were in response to the latest development over the NMU Bill.

Gbaramatu is the birthplace of wanted former militant, Government Ekpemupolo (aka Tompolo).

The traditional council’s statement noted there were “renewed siege, harassment and intimidation of communities and people of Gbaramatu kingdom by the Nigerian Military through water and air.”

The statement signed by Gbenekama, who is the Fiyewei of the kingdom said: “Since then the people have been living in fears of possible military invasion like the one of May 2009, when the military overrun a number of communities, claiming hundreds of lives and the destruction of property worth billions of Nigeria.”

Gbenekama said the people of the kingdom fear that the military is trying to repeat same act, unless urgent steps are taken by the Federal Government to call the military to order.

“The recent action of the military could be described as a mischievous one as the kingdom is very peaceful and do not expect such military actions,” he added.

The Gbaramatu leader admonished the military not to hide under the guise of insecurity to unleash mayhem on their people, stressing that even President Buhari’s home was more, but without similar military onslaught.