“Normally, no one should be begging anyone not to vote for… 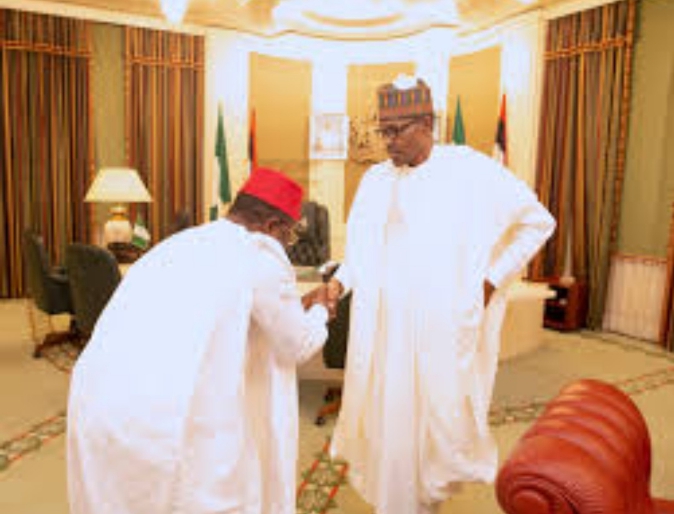 SAHARANEWS – Ebonyi State Governor David Umahi has said that he would not have anything to do with any Igbo group that castigate or insult President Muhammadu Buhari or any governor in the country.

Umahi made the statement on Friday when the members of the Igbo Leaders of Thought ( ILT) led by Professor Ben Nwabueze, paid him a courtesy call at the Government House in Abakaliki.

He said that he would closely monitor the proposed Abakaliki retreat being organized by another Igbo group called Nzuko Umunna to ensure that the organizers do not use it to malign or abuse political or religious leaders.

The governor said the group had written to him informing him of their plan to hold a retreat in the state.

He said he had to problem with the retreat provided they would not use the platform to castigate any governor or the President.

Umahi who said that the event would hold in three weeks times said he would stop the event if it turns out to be a platform for the castigation of President Buhari or any governor or government.

“Nzuko Umunna wrote to me and said they would be holding a retreat in Abakaliki on third weeks of this month. I told them that I had no problem with that. I will have problem with them of they use the retreat to castigate any governor, government or President. If that happens, I will collect their microphone from them and stop the program.

“I have said it severally that castigating our leaders will not do us any good. I have told my appointees that I will sack any of them who insult Mr President. ”

He commended the group for coming together to champion Igbo interest even as he enjoined them to shun partisan politics so as for the objectives of the group not to be defeated.

Earlier in his remarks, the Chairman of the group, Prof Nwabueze, told the governor that the group was formed by prominent Igbo leaders from different background for the purpose of championing the interests of the Igbo nation in the larger Nigeria polity.

Nwabueze who was represented by the Deputy Chairman of the group, Prof Chiweyite Ejike, said the group would continue to meet with relevant stakeholders of the zone for the overall interest and development of the zone.

ALSO READ:  JUST IN: Counsel Yourself Or Be Jailed For Treason, Presidency Threatens Atiku