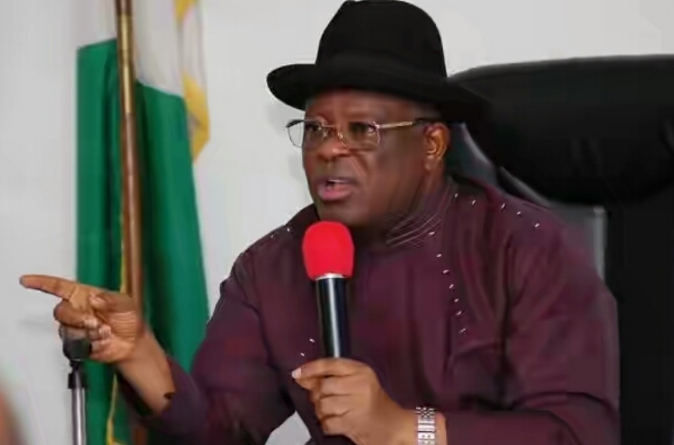 SaharaNews recalls that over 12 persons were killed, including a family of six, who were burnt to death by armed hoodlums.

Meanwhile, the governor had summoned stakeholders consisting elected and appointed officers from Abakaliki, Ikwo and Ohaukwu at his office at the government house, Abakaliki.

The suspension was with immediate effect, as the governor directed the affected chairmen and political appointees of those affected areas to handover all government property in their position.

Umahi also suspended three traditional rulers that were accused of having a hand in the sponsorship of the nagging crises.

Similarly, civil servants who were alleged to have a hand in the crisis have been asked to forfeit their salaries.

Umahi, who gave the order during stakeholders meeting at the executive council chambers consisting of elected and appointed political officer holders from Abakaliki, Ikwo and Ohaukwu, announced he heard there was ongoing heavy war in the area.

The governor, also expressed regret over another killings of a man “name withheld” who hailed from Aniri community in Enugu State that came to marry in Amasiri community in Afikpo north LGA of the state.

According to Governor Umahi, who expressed sadness over the series of killings taking place in the state, he was yet to know the number of persons killed in the state while he was on vacation.

“I had to cut short my vacating, even though I went in the guise of rest, that wasn’t to be. I saw a lot of things like cement factory, battery factory and food packaging that we should bring to Ebonyi State, and of course, they are coming to Ebonyi state.

“That made us to move from one province to another. I was still going to conclude two other provinces when I heard of this. Even I had to rewrite my journey to Guanzu. Because when I was supposed to come was in the next two to three days. We had to cut short the journey to be home because of the ugly incident.

“People came to marry from Aniri, but due to little misunderstanding, the visitors were butchered to death too. I also heard of Benue problem, and I read online when the deputy governor said he would suspend political office holders from there.

“Lastly, this ugly incident of roasting of eight people, including a woman and a small child. I was told this afternoon that the eight are from one family in Ikwo. I am told there are other people that were also killed on a motorcycle, which means I don’t really have all the figures”, he said.

However, a total of 51 political holders both elected and appointed were suspended indefinitely, pending the time they must have ensured the return of peace in the affected local government areas.