Media promoting activities of bandits and secessionists in… 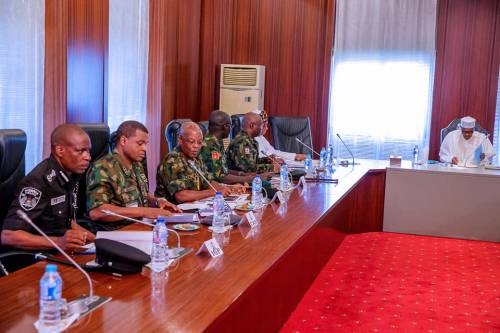 He also added that if there was anything that could “terminate” the country, it would be “security”.

“I regard it as very very precarious. I believe if anything were to terminate the existence of this good country we call Nigeria, the first will be security and if security is not handled and I admit it has not been properly handled then we have a serious problem and for the security to be rationally handled, it has to be effectively handled by putting square holes and square pegs,” Mohammed told ChannelsTV in an interview.

“When a general succeeds or fails, then we have a very serious problem if he feels he cannot be in place. And if you are to do the posting and the deployment, it has to be done on a rational basis in accordance with time, tests, procedures that are known globally.

“These service chiefs have had their terms and tenures as service chiefs rolled over a number of times in the process they have destroyed at least one or two generations of officers who are due to take over from them, that is unfair, that is injustice,” he added.

The northern leader also touched on the issue of insurgency and the Buhari administration’s claim of having “technically defeated” Boko Haram.

Mohammed explained: “If officers and men don’t believe in the task of fighting insurgency or banditry, you cannot motivate them enough. Secondly, if the morale is so low that soldiers went to the extreme extent of assaulting their officers, then you know there is something fundamentally wrong.

“The battle in the North East is not being won. The war must be fought, terrorism must be finished but it has not been finished. There is a fissile definition of fighting a terrorist organization as long as they don’t control any area, then they are finished. The Multinational Joint Task Force has not addressed the issue and if it has, it hasn’t done it well. It’s one thing to do something, it’s another thing to do it well and successfully.

“A lot of the problems we have, have their root not just in some banditry which somewhere springs up every day and then we begin to see there has always been some lawlessness because this country is under policed, is under controlled by the army and other security services.

The solution lies in one good, reasonable, reliable funding and provisioned government, without that, there is nothing you can do. Politics have been completely commercialized and monetized and nobody sincerely believes in fighting the war against corruption; indiscipline has become the norm.”