BREAKING: (VIDEO) Man Dies After Engaging In Hot S3x With A… 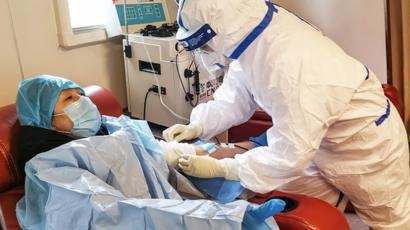 The COVID-19 outbreak is now officially more deadly than the 9/11 terrorist attacks which killed 2,977

The analysis predicts that the number of US deaths could vary widely, ranging from as low as around 38,000 to as high as around 162,000, due in part to disparate rates of the spread of the virus in different regions.

If social distancing is adhered to, the number of deaths from coronavirus is predicted to reach about 82,000 over the next four months, the analysis predicts.

On Monday 225 million people in the US were on lockdown as the likes of Virginia, Maryland and South Florida issued stay-at-home orders.

ALSO READ:  Things getting worst in Nigeria, we need to negotiate our unity — Sultan

Deaths in New York are expected to peak within seven to 10 days, according to Farzad Mostashari, the founder of healthcare startup Aledade.

Visits to hospital emergency rooms in New York City showed a decline in numbers over the weekend, Mostashari says, which puts hospitalizations on a downward trend and shows signs the state’s stay-at-home order is working.

State officials expect the number of deaths in New York to continue to rise as the outbreak reaches its projected peak in the coming weeks.

‘Whatever the numbers is, it’s going to be staggering,’ New York Governor Andrew Cuomo said. ‘We’ve lost over 1,000 New Yorkers… To me, we’re beyond staggering already.’

He said the rise in the number of new coronavirus infections appeared to be slowing and the hospital discharge rate was increasing.

‘People come into the hospital, they stay for a period of time, a number of days, and then they move on,’ Cuomo said.

Cuomo, one of the most prominent public figures of the coronavirus crisis, told a news conference the state might have to step in to close playgrounds in the country’s most populous city in order to enforce social distancing and slow the spread of the virus.

The deadliest day yet in the country’s mounting crisis, while New York cheered the arrival of a gleaming 1,000-bed U.S. Navy hospital ship as a sign of hope in the city’s desperate fight.

Workers build a makeshift morgue outside of Bellevue hospital to deal with an anticipated surge in coronavirus deaths in the coming days. The last time that New York City deployed a fleet of makeshift morgues outside hospitals was in the aftermath of the September 11, 2001, terrorist attacks.