EXPOSED:Buhari’s Minister Asked Me To Delay The Distribution…

2023: Igbo should negotiate power with other zones – Ex-CJ,… 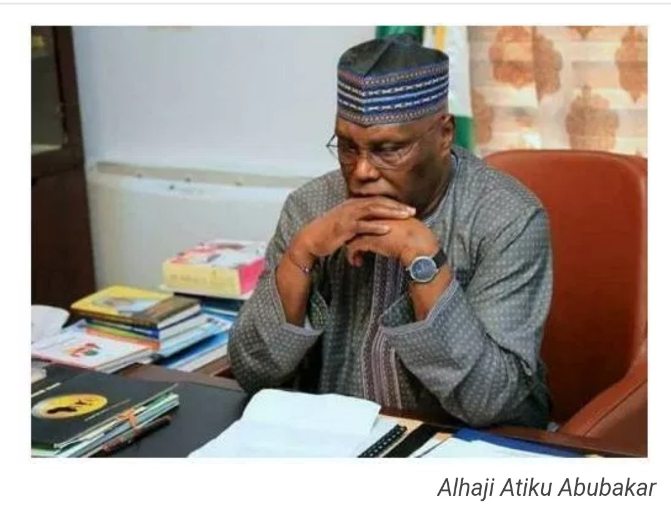 SAHARANEWS – Former Vice President and the presidential candidate of the Peoples Democratic Party in the just-concluded election, Alhaji Atiku Abubakar, has been fingered in the recent killings in Nigeria.

Centre for Diplomacy and Democracy, Washington DC, USA made this shocking revelation in a report released on Monday.

The centre said Atiku was actualizing his threat of destabilizing Nigeria as parts of his electioneering campaign.

Catherine Kerigun in the report signed on behalf of the group, said the game plan was to make President Muhammadu Buhari seem incapable of handling the security challenges in the country ahead of his inauguration and in order to attract a revolt against the government of that country .

Get Connected Without Data on Facebook
The report also revealed that Atiku Abubakar planed to truncate the swearing in of President Muhammadu Buhari come May 29, 2019 and has paid $30,000 to Fein & DelValle PLLC, a US firm in March to carry out the dirty deal.

Excerpts from the report read below.

The rising wave of insecurity in Nigeria became a cause for concern despite concerted efforts of the country’s security agencies. Daily, Gestapo like criminal activities spring up in various parts of the country that suggest that it might be politically masterminded because of the timing, target and ultimate victims of such organized crime aimed to cause untold embarrassment to the country.

Consequently, the Centre for Diplomacy and Democracy, Washington DC, USA, undertook a systematic research on the major issues that shaped the 2019 general elections, vis-a-vid actions of political parties and political actors that were capable of heating the polity and its consequences after the polls, with a view to unravelling the mystery behind the sustained security challenges in Nigeria.

The findings are mindboggling as it unraveled a whole lot of pointers that indicate that the security challenges experienced in Nigeria are politically motivated and masterminded.

The 2019 general elections in Nigeria was regarded as one of the most fiercely contested in the annals of the country. The incumbent President, Muhammadu Buhari and the main opposition candidate, Atiku Abubakar were locked in a fierce contest for the votes of the electorates. And in the process, promises were made, as well as threats as regards to the outcome of the poll.

The bulk of the threats were made by the opposition party candidate, Atiku Abubakar, and groups sympathetic to him, who carried on as he had already won the elections before the commencement of the polls.

ALSO READ:  US UPDATE: A presidency of over 30,000 lies and controversies---Trump

In the build-up to the elections, armed rebels from Nigeria’s oil-rich southern Niger Delta region (Niger-Delta Avengers) vowed to cripple the country’s economy if President Muhammadu Buhari was re-elected. The militant group said its preferred candidate was the main opposition candidate, Atiku Abubakar.

“We are in charge of the struggle now, and our strike teams are active and gallantly waiting to receive instructions from the high command to cripple the Nigerian economy again if Buhari is rigged back to the office. And this time, it will be a perpetual recession for Nigeria.”

“We are adopting Alhaji Atiku Abubakar, as the sole candidate to be voted for by all the people of the Niger Delta as a result of his political ideology, which is in tandem with our agitation for equitable and fair principles of federalism.”

In a report monitored on several newspapers in Nigeria, Atiku Abubakar had expressly stated that killings by herdsmen would continue if he loses the elections.

“The presidential candidate of the People’s Democratic Party (PDP), Alhaji Atiku Abubakar, stated that the killings by herdsmen would continue and ultimately spark series of ethno-religious crises that would be irreversible if Nigerians do not vote out the All Progressives Congress (APC) in 2019 elections.”

From the statements gathered, it is sufficient to link the threats made by Atiku Abubakar with the renewed security challenges in Nigeria. The repeated attacks by armed bandits, killer herdsmen all points to one direction, which is the fact that he lost the presidential election and indeed gone to court to contest the outcome of the election with a claim to having access to the server of the Independent National Electoral Commission (INEC).

Information gathered from impeccable sources indicates that it could not have been a coincidence that upon issuing such threats, before the elections, and after the elections, activities of herdsmen and armed bandits have increased tremendously.

There are several pointers to the fact that making the country ungovernable is a game plan of Atiku Abubakar who enjoys some level of support from some rebel groups in Cameroon by infiltration of some Nigerian communities and inflicting maximum damage to these communities.

The case of Zamfara, Katsina, Kaduna, and Taraba states presents examples of how Atiku Abubakar is carrying out the threat in a subtle manner such that would evade detection by the security agencies.

The statement by Atiku Abubakar stating that killings would continue if he loses the elections was a strategy designed by Atiku Abubakar to instill fear in the hearts of the electorates to secure their votes during the elections. However, this did not work out in his favour, and he has resorted to activating the plan B, which is to subtly engage the services of mercenaries from neighboring francophone countries to cause mayhem in Nigeria.

The activities of kidnappers on the Famous-Kaduna Abuja highway have defeated all known security strategy. Top security sources revealed that the bulk of the kidnappers are not Nigerians but persons from neighboring countries. And they do not kidnap for ransom, but they kidnap to paint an atmosphere of insecurity.

This much was corroborated by a statement issued by Atiku Abubakar’s party when on 27 April, 2019, it issued a statement that stated thus “The People’s Democratic Party (PDP) has for the umpteenth time said the All Progressives Congress (APC) was incompetent to handle the country’s affairs, saying rising levels of crimes and criminality, corruption and impunity have raised questions about the actual purpose of government in Nigeria.”

“Security situation has been such that prominent Nigerian clerics have been raising serious concern on the issue of leadership, even questioning whether we have a Commander-in-Chief in this country. While the Presidency continues to argue that there exists government in our country today, what obtains, in reality, is different. The level of bloodletting occasioned by the barrage of criminalities across the country can only be happening in a country without a government.”

The above statements from the opposition party leave more to be imagined. It points to a bigger plot to cause disaffection amongst the populace and to paint a picture of incompetence before the international community.

This much was also corroborated by the fact that security agencies are probing an alleged plot by Atiku Abubakar, to prevail on the United States to recognize him as the ‘authentic President’ of Nigeria.

The agencies are already on the trail of members of the Atiku Deservation Group behind the printing and distribution of Atiku Abubakar’s posters in some parts of the country aimed at confusing the polity.

The posters bore the inscription PUKKA, which in Hindi and Urda figuratively means” fully formed,” “solid,” “permanent,” “for real” or “sure, authentic, genuine, solid and excellent.”

It was gathered that the security agencies are working on a theory that some groups loyal to Atiku Abubakar were out for subversive activities against President Muhammadu Buhari’s administration. The whole script is about a subversive plot against the administration of President Muhammadu Buhari. Security agencies picked up some intelligence, and they are already investigating individuals and groups connected with it.

Another fact that lends credence to the plot by Atiku Abubakar to truncate the swearing in of President Muhammadu Buhari come May 29th, 2019 is how he paid $30,000 to Fein & DelValle PLLC, a US firm in March.

“In its terms and conditions for representation, Fein & DelValle PLLC had said it would establish and operate a situation room located in its Capitol Hill offices in the US and enlist the services of Lloyd Ukwu, a Nigerian barrister and trusted confidant of Atiku Abubakar, to assist in the operation of the situation room.

“The firm also proposed to execute strategies to secure the US endorsement of Atiku’s efforts to defeat what it called “flagrant violence and irregularities orchestrated” by the All Progressives Congress (APC) and Buhari to compromise the presidential election.

This report from all indication points to the covert role played by Atiku Abubakar of the People’s Democratic Party (PDP) in inciting and instigating insecurity in Nigeria. It was established beyond a reasonable doubt through credible sources that Atiku Abubakar had also compromised some elements with the security apparatus in Nigeria to leak security strategies for tackling the menace of kidnappings, armed banditry, and killer herdsmen.

The statement credited to Atiku Abubakar that killings would continue should President Muhammadu Buhari be re-elected has seen a rise in the wave of insecurity in Nigeria, so much so that the opposition Peoples Democratic Party issues a press statement immediately there is a security breach anywhere in the country.

The report further revealed that Atiku Abubakar had exhibited a desperate attempt at truncating the presidential inauguration coming up in the coming weeks. Unless urgent counter steps are taken, the activities of sponsored armed bandits, kidnappers and killer herdsmen will reach an alarming level.