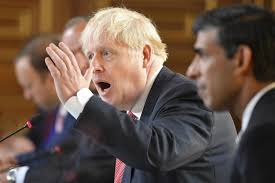 Germany said Wednesday it expected Britain to “fully implement” the terms of an exit deal agreed with the EU, expressing concern about proposed legislation rolling back key planks of the accord.

“We would continue to trust the British government to fully implement the exit agreement,” foreign ministry spokeswoman Maria Adebahr told reporters in Berlin, which currently holds the European Union presidency.

“That is why we see yesterday’s announcement in the House of Commons with concern,” she added, referring to UK plans to make unilateral changes in breach of the Withdrawal Agreement with the EU,

ALSO READ:  "It's very easy for bandits to rescue their people from Government prisons but very difficult for Government to rescue its citizens from bandits--Yul Edochie