How Nigerian security agents invaded church in Imo and…

EKWEREMADU: I Warned About This In The Senate, I Know A…

BUHARI DOUBLE : A critical look at Nnamdi Kanu’s claims and the disturbing facts that are available 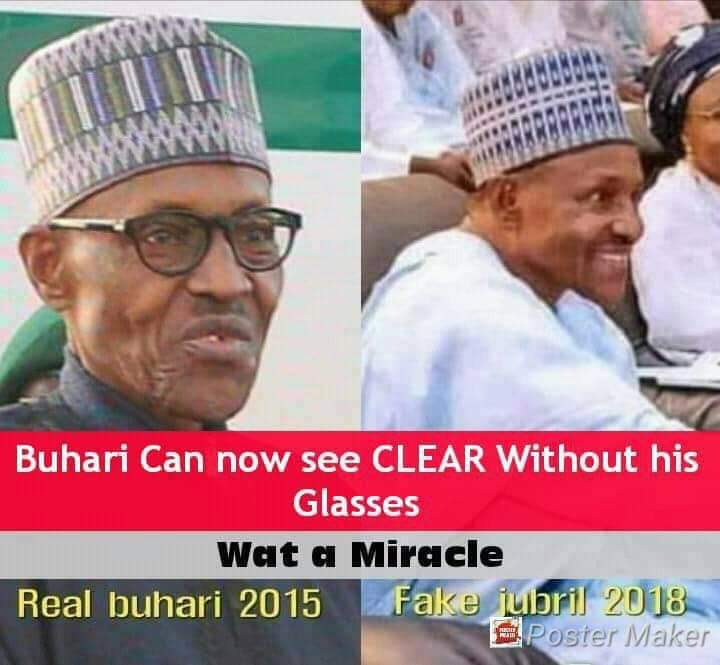 Several high-profile figures in Nigeria, including a former government minister, have claimed that President Muhammadu Buhari has died and been replaced by a lookalike from Sudan.

Tweets, Facebook posts and YouTube videos repeating claims that the leader of Africa’s most populous nation is an imposter called “Jubril” have been shared and viewed over 500,000 times. Buhari But there is no evidence to back up the claim and the government has not commented.

What are we verifying? Former military ruler Buhari, 75, has made several trips to London for medical treatment since mid-2016. Initially, the presidency claimed he had a “persistent ear infection”. But concern mounted from early last year about his prolonged absences, prompting speculation the condition was more serious and might affect his ability to stay in power.

A lack of information about the exact nature of his illness, his gaunt features and a reduction in public appearances have fed speculation about his well-being. Claims about Buhari’s identity emerged a month after Buhari returned from another lengthy medical trip to the British capital. The earliest online mention of the claim found by AFP was in a video posted by Twitter user @sam_ezeh on September 3, 2017.

The video has since been shared more than 5,000 times on Facebook and Twitter. In it, the leader of the Indigenous People of Biafra (IPOB) movement, Nnamdi Kanu, speaks to his supporters and says Buhari had actually died. “The man you are looking at in the television is not Buhari His name is Jubril, he’s from Sudan.


After extensive surgery they brought him back,” he says. In separate broadcasts on the outlawed pirate radio station Radio Biafra, Kanu has called Buhari “Jubril Al-Sudani”. But on each occasion, he gave no evidence for the claim. The IPOB leader is a fervent critic of Buhari   and the Nigerian government. His movement wants a separate independent state for the Igbo people who dominate southeast Nigeria. Despite the lack of evidence, the claim has been picked up by other opponents of Buhari, who in February next year is seeking a second, four-year term of office. On April 5, 2018, Femi Fani-Kayode, a former government special advisor and minister under president Olusegun Obasanjo, repeated the claim on Twitter

(1)A similar post on his Facebook page was shared more than 400 times. Press releases and statements by IPOB and its sympathisers have repeated the claim .

(2) The rumour appears to have been fuelled further by a real-life event in May this year, when a Nigerian diplomat — Habibu Almu — was found dead in the Sudanese capital, Khartoum. Nigeria’s foreign ministry said on May 14 that Almu had been “stabbed to death” and that a Sudanese woman of Nigerian origin had been arrested.

(3). Buhari’s appearance has come under scrutiny in many posts. One post compares Buhari apparently writing with his right hand in one photograph and his left in another. But analysis indicates the image of the right-handed Buhari had been reversed.

One video even speculates on how a dead Buhari could have been operated on to transfer his appearance to “Jubril from Sudan”, showing a scene from the 1997 film “Face/Off”

(4). – What conclusion can we draw?  The rumour has been stoked by Buhari’s illness, which saw him receive treatment abroad for a large part of 2017, and the killing of a Nigerian diplomat in Khartoum earlier this year. Those pushing the claim are known critics of Buhari and his government but have provided no concrete evidence to back up their assertion.

BUHARI OR JUBRIL : What did the senate president mean when he said that…..