Why Buhari must be pressured to sign amended Electoral Act…

Buhari Is Not Doing Well But Court Declares Him winner, So Many PDP Govs Go To His House At Night, That, I have Not And Will Never Do – Wike 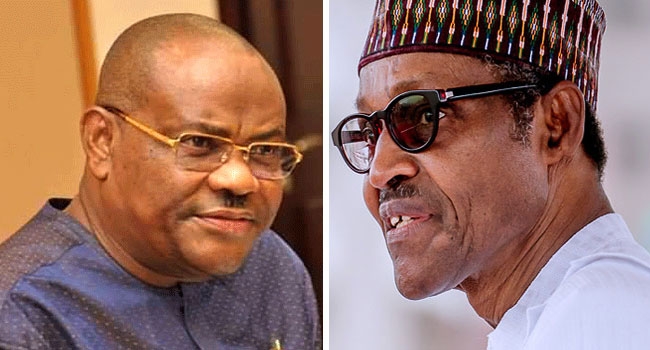 He gave the explanation on Thursday at an event in Emohua on Thursday, in reaction to the criticism that trailed the congratulatory message he sent to the President whose victory at the February 23 election was challenged by the Peoples Democratic Party (PDP) and its candidate, Atiku Abubakar.

According to the PDP governor, it is better for him to offer public congratulations than visiting the President at night.

He noted that unlike some governors of the opposition party who allegedly visit President Buhari at night, he made his declaration public because it came from the heart.

“I am sure all of you are surprised that I congratulated Buhari. Is it not good for me to congratulate him than to go to his house in the night?

“So many PDP Governors go to see him in his house in the night. I have never gone and I will not go. I won’t go,” Governor Wike was quoted as saying in a statement by his Special Assistant on Electronic Media, Simeon Nwakaudu.

He added, “We are the only state that the Federal Government refused to pay us our money used to execute Federal projects because I don’t go to see him in the night and I won’t go.

“He is not my friend, he is not doing well, but he won in court, should I say that the court did wrong? No.”

The governor, however, asked the President to carry Nigerians along in governance and ensure that the country is kept unified and not divided, irrespective of political or ethnic affiliation.

He stated that politics, for him, was a game of interest, stressing that Rivers people in the All Progressives Congress (APC) were under obligation to attract federal benefits to the state.

“Anything that is against the interest of Rivers State, I will not agree. These people sold us out, thinking that they are doing Governor Wike. It is the state that you are offending because I am just one person,” Wike said.

He alleged that despite the key links Rivers has to the President, the East-West Road, the seaports, and other federal projects have been completely neglected since 2015.

The governor said nothing indicates that the state has prominent APC members working with the President.

He also noted that Rivers is a major oil-producing state that deserves major projects from the Federal Government.

Governor Wike said, “They should not punish Rivers State because of me, I am just one individual.

“We have not benefited anything from the Federal Government. The only thing we have benefited is the abuse they heap on me.”