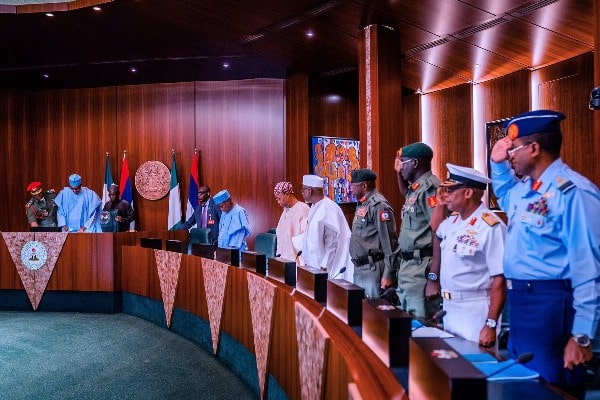 SAHARANEWS – A security council meeting is currently ongoing at the state house in Abuja, barely a day after lawmakers called for the resignation of the nation’s service chiefs.

The meeting which started off by 10am, had Secretary to the Government of the Federation (SGF), Boss Mustapha; Chief of Staff to the President, Abba Kyari; Minister of Defense Maj. Gen. Bashir Salihi Mahashi (Rtd.); Minister of Interior, Ogbeni Rauf Aregbesola; and the National Security Adviser (NSA) Maj. Gen. Babagana Monguno (Rtd.) in attendance.

The agenda of the meeting is still unclear at the time of filing this report, but The Nation reported that it might be connected to the rising insecurity witnessed across the nation.