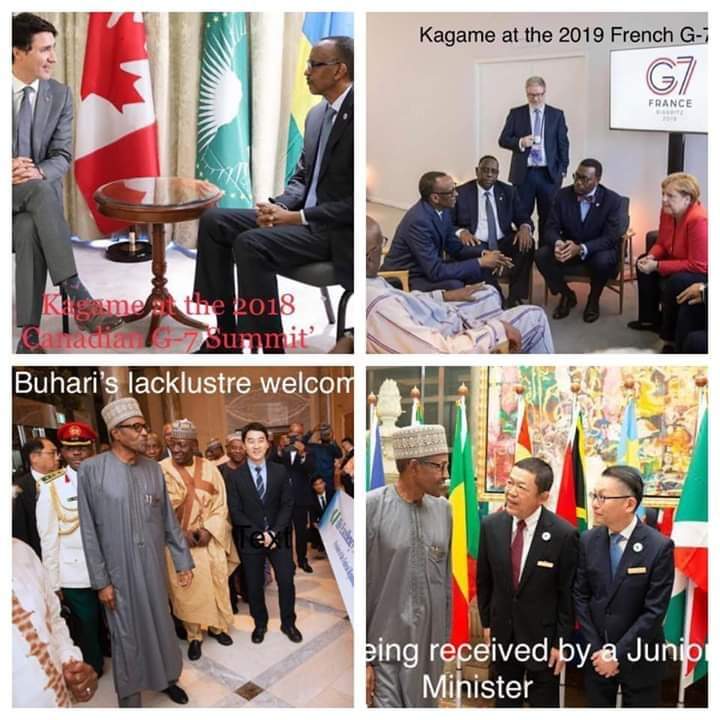 SAHARANEWS – My attention has been drawn to a planted story by the Nigerian Presidency, claiming that my tweet that General Buhari was not invited to the G 7 Summit because of his misrule is “misleading”. I am glad they did not say I lied. They only said it is misleading. Since that is the case, let me clarify.

For instance, the largest economies in Africa will usually be invited, except where such economies have governance challenges arising from misrule or other anti democracies practices, such as compromised elections.

Nigeria is Africa’s largest economy (due to past governments, not the Buhari junta) and should naturally be invited to represent Africa at the G-7. The claim by the Presidency’s hired guns that Nigeria was not invited due to the rotational invitation policy does not hold water.

Rwanda’s President Paul Kagame was invited to the 2018 G-7 summit which held in Quebec, Canada in June of 2018. He is also invited to and is attending the ongoing G-7 summit holding in Biarritz, France.

If the invitations were done rotationally, as the Presidency’s hired guns would like Nigerians to believe, Kagame would not have been invited to the G-7 back to back. Kagame was invited back to back because he is relevant to the G-7.

The truth is that Nigeria was not invited to the G-7 summit because of governance and democracy challenges. For example, just a week before the summit began, Nigeria was censured for misrule by a G-7 member state.

It will be recalled that on August 18, 2019, just a week before the G-7 summit in France began, the US Department of State released the 2019 Fiscal Transparency Report which classified the General Buhari led Nigerian government as “not fiscally transparent.”

The timing of the release of the 2019 Fiscal Transparency Report was not coincidental. It had followed Travel and Visa Bans by the US government against Nigerian politicians that had undermined the 2019 Nigerian elections of which prominent members of the Buhari junta were targeted.

Beyond that, Nigeria, under General Buhari’s misrule, has deteriorated to the point whereby it has been overtaken by Ghana as West Africa’s number one destination for Foreign Direct Investments. We must be aware that the G-7 is above all an ECONOMIC SUMMIT. Hence Ghana was invited and Nigeria was not.

It is obvious that General Buhari was embarrassed by his G-7 snub. Why else would the Presidency hire hack writers to attack me for saying the truth? Why else would Buhari go to Japan to visit the Japanese Prime Minister at a time when the Japanese leader was in France?

Only a JOBLESS leader leaves his country to visit another leader, when that leader is not in his country. A serious leader, knowing that his host did not consider him important enough to be around when he visited, would have sent a minister to represent him.

But General Buhari went to Japan at the same time as the Japanese Prime Minister was in Biarritz, France, attending the G-7 summit. That alone tells you how desperate President Buhari is to cover his embarrassing snub.

Thinker. #1 Bestselling author of Facts Versus Fiction: The True Story of the Jonathan Years. Avid traveller. Table Shaker. Buhari Tormentor. Sharer of the Gospel, not the gossip.