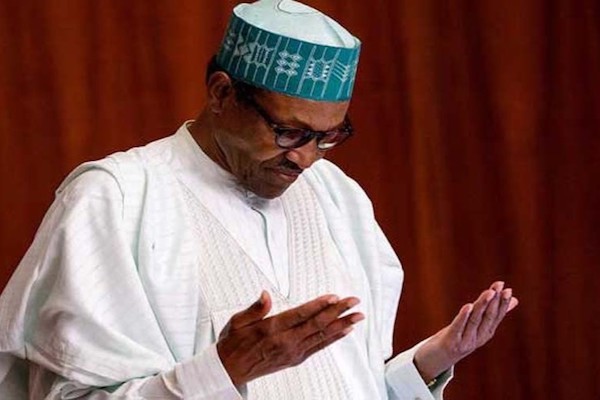 President Muhammadu Buhari on Friday offered a special prayer against another civil war in Nigeria.

The President, who recalled that in the 30 months of the civil war, Nigerians on both sides lost numerous lives, prayed that “never again shall we experience such”.

ALSO READ:  BREAKING: S'East Govs Ban Movement Of Herdsmen From State To State, Community To community, Use Of AK-47, Machetes By Herders In The Whole Of South East (Full Details of Issues Raised By Govs)

President Buhari, in a statement issued by his spokesman, Garba Shehu, paid tribute to the patriotic martyrs of the civil war whose glorious sacrifices enabled the unity of this great nation.

Buhari, who thanked the Movement for their profuse prayers for an end to the war and the reunification of Nigeria, welcomed the Grand Khalifa to Nigeria and lauded their efforts in finding solutions to the problems of security in the country.

The President described the spiritual leader’s visit as historical and hailed the sect for its peaceful conduct.

The leader of the Tijjaniyya in Nigeria, Sheikh Dahiru Usman, described the sect as the largest with 70 million followers across the globe and prayed for continued peace and blessings for the country.

Sheikh Niass said he had come to formally introduce himself as the new leader to the Government and people of Nigeria.

He prayed for peace, unity and the greatness of Nigeria.