He survived the Thousand Oaks shooting and the Las Vegas…

BUHARI RETURNS: It was a show of shame as Buhari was welcomed with “it’s the real me I can assure you” Tshirts. 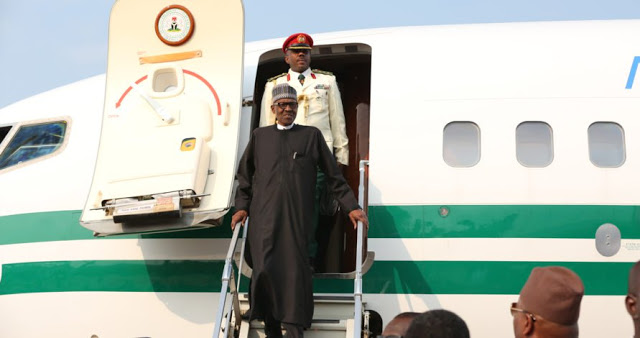 President Muhammad Buhari has returned back to Nigeria from  Poland, where he participated in the opening of the United Nations Climate Change Conference in Katowice. 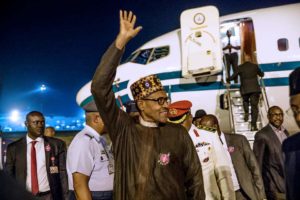 President Buhari was spotted waving to his supporters.


While in Poland, the President delivered his national address at the 12-day meeting of COP24, and met with several world leaders . He also visited the impressive Nigerian pavilion at the climate summit.  President Buhari on Tuesday visited the Auschwitz-Birkenau Memorial and Museum, in Oświęcim, Poland where he paid tribute to Holocaust victims.

Before leaving the Museum, which included the Nazi concentration camps Auschwitz I and Auschwitz II-Birkenau, Buhari fielded questions from State House Correspondents traveling with him. The president described those fanning embers of discord in Nigeria as ‘illiterates and ignorant’.


President Buhari held bilateral meeting with Swiss President Alain Berset, President of Poland, Andrzej Duda and the Prime Minister, Mateusz Morawiecki as well as his Austrian counterpart, Alexander Van der Bellen. The Nigerian leader also met with Dutch Prime Minister Mark Rutte and both leaders followed up on their past discussions, during their last meeting in The Hague, Netherlands, in July, which centred on trade, investments and partnerships in agriculture.

ALSO READ:  JUST IN: Buhari's failure is as a result of incompetence, it has nothing to do with me - GEJ

The President welcomed the proposal by the Dutch Prime Minister to visit Abuja soon and promised that the Nigerian government would continue to provide a conducive business environment for existing and prospective Dutch investors.  President Buhari met with the Prime Minister of Estonia, Jüri Ratas. The Prime Minister of the Northern European country sought Nigeria’s support on its bid for a non-permanent seat at the UN Security Council for 2020 to 2021.


Buhari also attended a town-hall meeting with Nigerians in Poland, a day after his arrival in the country, where he dismissed as wicked the cloning allegation against him, saying ‘‘It’s real me, I assure you. I will soon celebrate my 76th birthday and I will still go strong’’.

JUST IN: If we come against any arrogant, puffing politician he will be messed up – Oyedepo fires back at presidency.

It’s Taboo in Igbo Culture to Bury Osinachi in Her Father’s House, She…