Nothing bad Should Not happen to Kanu in prison or Else –…

BREAKING: Imo Community Thrown Into Tears And Mourning As… 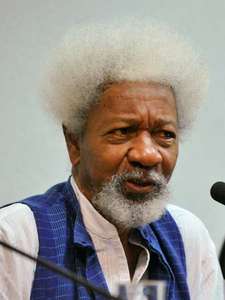 Nobel laureate and renowned writer, Professor Wole Soyinka has raised an alarm over the issue of stolen identity, noting that he has been a victim of recent.

The alarm from the Nobel Laureate came barely a week after President Muhammadu Buhari cleared the dust surrounding his identity when he was addressing Nigerians in Poland.

It was gathered that Soyinka, addressing a cross section of audience at Freedom Park in an event marking the 70th anniversary of human rights and worldwide reading for press freedom in memory of Jamal Khashoggi, stressed on the need to take the issue of stolen identity with seriousness.

He said: “Recently, we have a situation in Nigeria and that is the issue of cloning President Muhammadu Buhari. We have people who have taken that issue seriously. These were people that one can never believe to accept such considering their level of intelligence.

“When Buhari went to Poland, I said what a coincidence because I hope while he was there, he will be able to sort-out his identity and there will be a report on the return of his identity.

“Poland appears to be the centre for Nigerians settlers with stolen identity.”
Soyinka said upon discovery that his identity was being used in Poland, he visited the country and demanded that the page using his identity on Facebook be pulled down.

He said: “But he (operator of the business) refused, claiming that he has authority to do that. In my name, this fellow sells and buys things which I don’t even use.”

Speaking on press freedom, the Nobel Laureate noted that the right has been abused with the emergence of social media. He, however, said that the freedom to press and expression should not be taken with levity and should be guaranteed.

“If the doctrine of freedom of expression was to be reversed, there will be certainly a number of issues to be addressed because expression on social media has taken a quantum leave in the last few years that cannot be imagined.”

JUST IN: US government responds to GEJ over allegation against Obama.

2019: Buhari refused to sign the electoral act because of his plans Rig – Wike